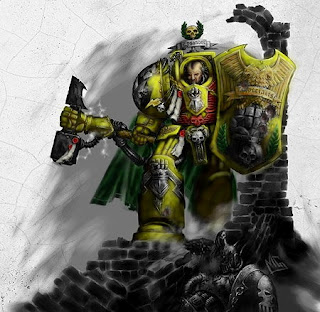 I have this fixation on terminators right now. I've been playing lots of 2500 point games lately and for the most part they have run about the same amount of time as 2000 point games back in 40k5. It's obvious that terminators are very strong now in 40k6 - you've got the 2+ armor save versus power weapons which is huge. One of the few short comings for Draigowing is the lack of stormshields and close combat weapons that bypass the 2+ armor save. On the plus side daemonhammers are free for Paladins so that takes care of one shortcoming. I include one warding stave in each unit to soak up instant death wounds in melee using Look Out Sir! (LoS!) appropriately... So a unit of five Paladins lead by a character is still highly survivable plus the daemonhammers are extremely killy, especially with the application of Hammerhsnd for S10 instadeath... Versus a Warboss mounted on a bike attached to a squad of Nob bikers I might have to actually activate the force weapons - problem solved. In terms of stormshields I have multiple psycannons which I believe overall are better than stormshields... Offensive threat versus defense wins out.

I run Draigo as one of my characters who is a level 2 psyker along with a Librarian for the other squad so my psychic defense is 4+ due to Deny the Witch for both squads of Paladins which is about as good as it gets with the exceptions of the rune staff and a Farseer with Runes. Draigo makes his squad fearless which is another boon... Suddenly Imperial Psyker Battle Squads aren't so annoying any more.

I always use the Grand Strategy to cast reroll 1s to hit and wound which is the equivalent of Preferred Enemy plus Paladins are characters so I can direct all hits on a roll of 6+.

I am using the landraider Crusader with psybolt ammo and the Stormraven as transports so it's my choice when I want to engage my Paladins and bring their full strength to bare versus opponents... This is more protection for my army. The landraider is highly survivable and only AP1 ranged weapons can one shot it during the enemy shooting phase for the most part. The Stormraven is currently one of the best fliers available and is also highly survivable plus it often can easily deliver one unit into the heart of battle. If I'm playing against an army with solid anti-flyer defense my flier's embarked squad can use the Stormraven Shadow Skies rule to drop off it's squad so I don't have to worry about them dying to a wreck or explosion... Or I can simply hold the squad in reserve and Deep Strike them onto the battlefield the old fashioned way.

So how does Lysander fit into the mix... He along with a squad of five assault terminators (all equipped with thunderhammers and stormshields) ride in a landraider (note thst the Space Marine landraider transport capacity is 12 Marines or 6 terminators) and hold down the center of table discriminately firing both twin linked lascannons then burst out at the optimal moment to lay down the smack down. This combined unit has lots of synergy with Draigowing and makes up for the lack of melee weapons that bypass the 2+ armor save and stormshields. Lysander is a beast in melee... It is most definitely what it is and hurts the enemy in a big way.

My army has a small model count, which is typically the case, and they are doing just fine. In an epic battle versus a local veteran IG player with lots high strength low AP pie plates I was able to achieve a crushing win.
Posted by Terminus Est at 11:39:00 PM

Email ThisBlogThis!Share to TwitterShare to FacebookShare to Pinterest
Labels: Draigowing