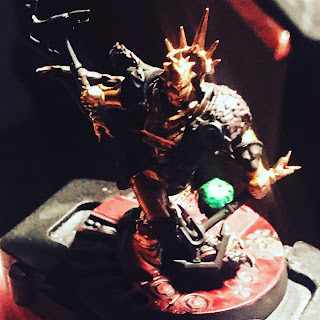 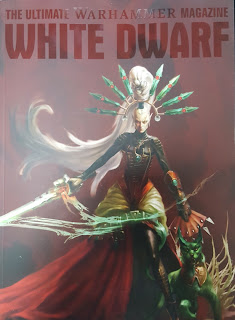 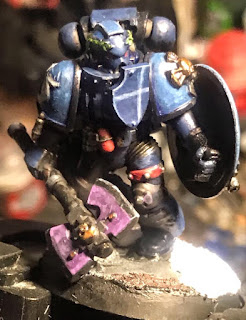 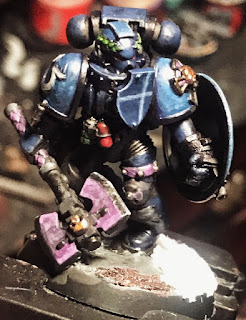 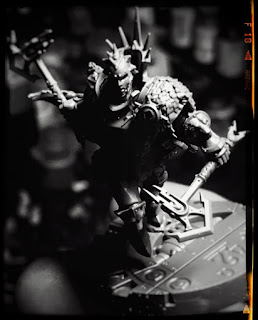 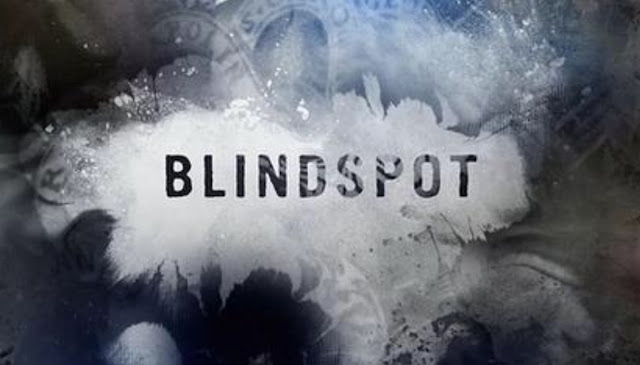 Conrad Curze sat upon his throne in the command dome of the Night Lords’ flagship Argent. His helm rested upon the deck as the Primarch took in his surroundings. There was silent tension in the bridge. No one spoke as his black eyes looked upon each and every entity. He sensed their fear of him, all except for one. Talos stood nearby looking him straight in the eyes.

"My Lord I have news for you." spoke the Lieutenant. Talos continued before Curze could reply. "Fresh graffiti has been found on a bulwark in Sector Six... Blood is Thicker than Water it says painted in blood."

The Primarch stirred. "Blasphemy." he hissed. "Who would dare and what does it mean?"

"All video logs have been transcribed at length but there’s no trace of the vandal." Talos replied.

"Download the logs to my portent. I’ll watch them myself."

"Your will be done my Lord." Talos ran his tongue over the smooth crowns of his teeth. "I have studied the message and deciphered its meaning."

"How did you come to that conclusion?" snarled Curze. "Are you telling me there’s a spy within our ship?" The Primarch stood up towering over his Lieutenant. "Come clean with me now."

"Come clean?" Talos repeated. "Maybe there is some discontent. I’ve told you exactly what I know. No one else here had the courage." His eyes shone bright, his face set like stone. "Word has it the Emperor has sent an assassin to take your life. This we all know."

Curze stepped forward toward Talos. "I want to see it for myself."

"I’ll take you there now." said the Lieutenant calmly.
Posted by Terminus Est at 1:00:00 AM No comments: 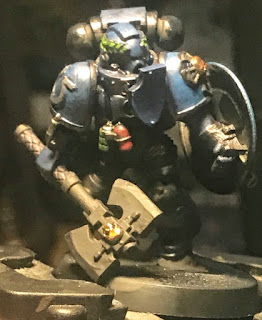 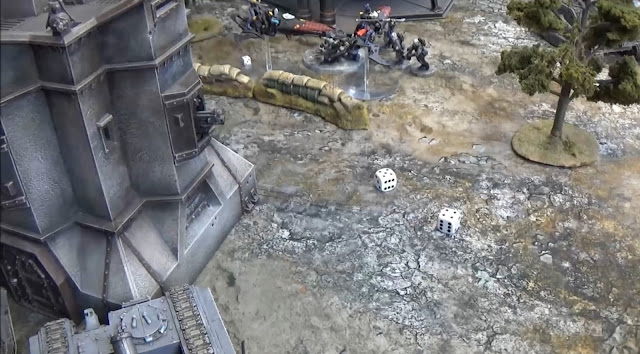 Hi everyone Black Blow Fly here again to discuss the subject of Video Battle Reports. I think it takes a lot of work to produce real quality and often we just take it for granted. Some of my favorite channels are from the United Kingdom:

These guys understand what makes for an enjoyable game to watch. I like to see a narrative element along with an exciting game featuring interesting armies matched up against each other with some banter.

Now I’d like to make a brief public service announcement regarding Grim Resolve and they are by far one of my favorites. Sadly their studio was recently broken into and all their recording equipment was stolen. They have created a Go Fund Me site so you can help them get back on their feet again:

Here’s one of their many excellent video Battle reports featuring Harlequins versus Renegades, see if you can guess what the comet brings:

All of their reports are free, no paywalls for content. Check them out... I think you’ll enjoy them.

Now I’ll cover what I think makes for a good VBR and what doesn’t.

1. Beautiful armies and great terrain.
2. Interesting armies and scenarios versus overly competitive.
3. It’s very important to get the rules right as much as possible... lots of mistakes just ruins it. The channels I’ve listed above are all very knowledgeable regarding rules and when they do make a mistake often they own up to it and correct them.
4. One of my biggest pet peeves are people that have the choice to use a command point for a reroll and instead of just rolling the dice they spend five or more minutes discussing all the reasons why they shouldn’t but then finally they do. It’s annoying at best and really puts a damper on games.
5. My next biggest issue is when people continuously apologize to their opponent throughout the game when their dice are literally on fire or continually draw great cards for Maelstrom games. Lopsided games are not fun to watch.
6. Another peeve is when one player turn takes more than half the length of the entire battle report. There’s a reason why the good channels don’t waste your time showing every dice roll. Good battle reports split the time evenly between both players.
7. My last gripe is when a player wants to go back a turn or more to do some action they forgot such as shooting with a unit of theirs... that’s just poor sportsmanship plain and simple. The channels I’ve listed above play on and just let it go - good sportsmanship on both sides of the table is everything.

What are things you like and what are your peeves ?
Posted by Terminus Est at 10:40:00 PM No comments: 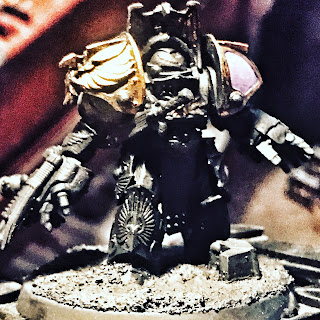 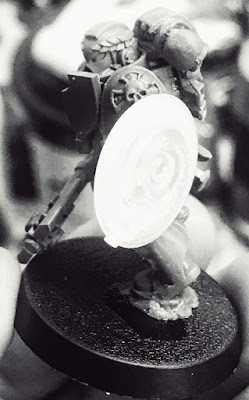 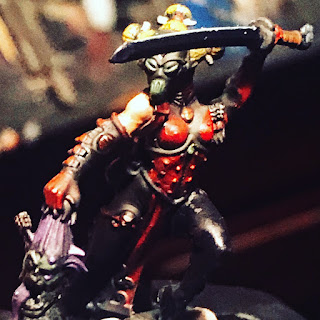 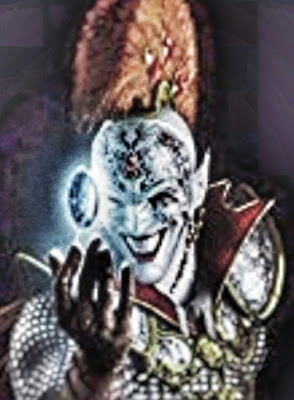 Copper urns filled with sticky black incense burned slowly filling the chamber with a sickly sweet smell, the burnt residue coating the white marble columns and sculpts of Ancient Drukhari Warriors. Lounging upon the soft red velvet of the large oak framed bed the Archon intently watched the muse dancing before him. Her pale flesh was coated with the fresh slicked blood of innocents recently slaughtered in the fighting pits of Commoragh. The enchantress wore a soft black leather mask covering her face, the bright blue eyes shone like polished gem stone burning with hidden emotion. She danced around the chamber in perfect rhythm to the lilted music coming from the slaves. Her hands snaked back and forth like serpents hiding her masked face. The Archon smiled and slowly clapped his gloved hands. Her skin shone under the glistening blood drenching her muscled limbs. "Look upon me." she whispered above the din of music.

Frowning the Archon began to rise up in anger. "Do not speak again." She clapped her bloody hands mocking him. Her body then shimmered taking on a new form. Hard muscles rippled under the tight black body glove. M’Shen drew the saber from the ivory carved sheath resting upon her tiny waist. The fractal edged razor sharp blade struck out with blindly speed cutting at the very real-space, freezing Warp energies split through the void coating the immediate area with hoar frost. She lunged at the Archon knocking the heavy bed aside. He rolled away as she pressed the assault driving the blade at his face. The tip punctured a limb serrating it from the joint. Blood spurted from the fresh wound coating the wall.

The slaves has fled at the first sign of violence. The Assassin and Archon both stood still for a brief moment taking in the abject silence surrounding them. M’Shen lifted her mask revealing a beautiful young face wreathed in curled locks of golden blonde hair then she struck the killing blow splitting the Archon in twain with one stroke. His body split in half one side falling upon the bed, the other half toppling upon the stone cobbled floor.

Quickly she dragged the two halves over into a dark corner of the chamber pouring a vial of black acid over the dead body. Each side dissolved as the acid deconstructed the flesh and bone at the molecular level. The stench was absorbed by the sickly incense.
Posted by Terminus Est at 12:38:00 AM No comments:

Wreaths of coiling burning Promethium split into the bottom chamber igniting the purestrains just before they could charge. Tyrion stepped into the conflagration and looked upon the very last of the enemy. They were corrupted and twisted by the alien strain... their bony heads bloated and throbbing. The Ancient could feel their collectively repressed psychic power bleating in abject anger denied by the Pariah geneseed within him. Thick gouts of black blood dripped steadily from their nostrils as he watched the swollen pulsating veins engulfing their tiny skulls. His veterans began to fill the chamber stepping across the ashes and cinders left in remains of the razed genestealers. One by one each of the Magos were brought to their knees and chained to the rock beneath them. Arghus silently poured vials of oil on everyone of them then the Deathwatch Kill Team stepped back away from the mutants.

"You have been found guilty of the utmost treason. Punishment is death by cleansing flame." said Tyrion as he ignited a torch. He then stepped forward and brought it down upon the hulking figure of the Patriarch. It screamed in intense pain as the flame engulfed the villain. One by one each of the magos were incinerated, the remaining ones forces to watch as each of their compatriots was burnt alive.

Finally there was only one left remaining. Argonaut grasped his limbs within his power fist and began to slowly grind the very bones against each other, snapping every limb one by one. "Please have mercy." gasped the last magos as his black bloated tongue rasped and saliva drooled down his wrinkled face. The Salamander laughed as he began to tear off its arms. The magos screamed again. 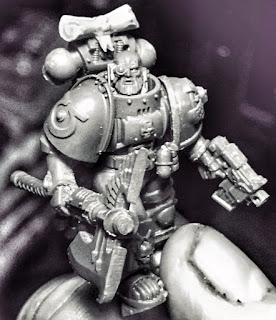 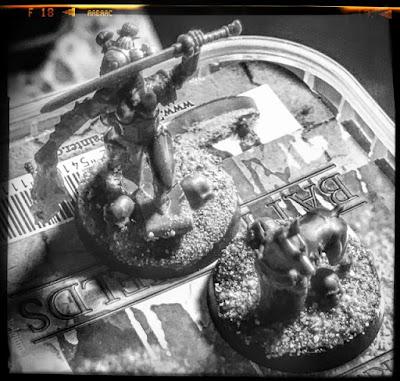