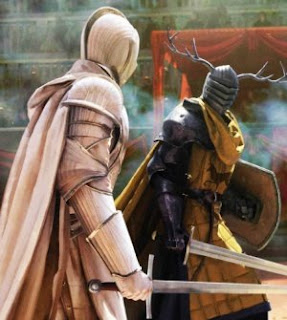 The twins awoke beside each next to the fresh grave. Immediately they looked at each other.

"Only one can pass." came the booming voice of the Space Marine who stood above looking down into the pit. Hard rock formed the walls weathered by time. Pieces of broken bone littered the stony ground. Together they looked up at the War Hound. He threw a pair of daggers down into the pit. "Very few come this far, you are as much the victors of these games as survivors. Know that whomever wins this final test shall serve a special place in our Legion."

Together as one the brothers spoke "No." Their young faces filthy with grime and sweat looked up, eyes blazing in defiance. Neither looked upon the weapons.

"Then you shall both die." decreed the War Hound. "There can be no pity amongst our ranks."

"Fools." sneered the Space Marine looking down upon them then he drew his chainsword and leapt down amongst them. "You mar the very honor bestowed upon you." His weapon screamed to life as he activated the mechanism. Others above looked down in silence to watch. The War Hound towered above the youths immediately lashing out. Moving quickly they split apart, each going to opposite ends of the pit. "Cowards."

He turned towards one then felt a stinging pain behind his eyes momentarily clouding his vision. Laughing the War Hound vigorously shook his head to ward off the unseen attack. He felt his eyes begin to bulge and hot bile filled his mouth. A huge piece of stone canyoned the back of his helm cracking one of the eye lenses. Blindly he struck out swinging the chainsword vigorously, both gauntlets tightly gripping the hilt. The earth seemed to shake rising up knocking him to his knees.

"Halt!" yelled another War Hound from above. Warily the twins looked up for the briefest moment to spy the a lined face. They felt the world turning then spinning. 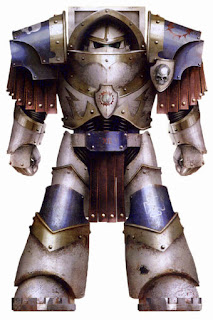 "I am a World Eater, a member of the XII Legion." said the Space Marine. "To be more exact, I am a Librarian. My lot were looked down upon by our Primarch Angron. He tried many ways to kill me but here I lay intact having thwarted his every attempt. I was left to myself in this device, placing myself in stasis all this time. Angron and his warriors have an intense hatred of anything psychic as any manifestation however so slight, it triggers their Butchers’ Nails sending them into a state of uncontrollable bloody rage. In time I came to despise them as well - they lack any finesse and are ignoble creatures."

"My name is Vorias, I was Angron’s Chief Librarian. I’m certain he thinks me dead for no one should be able to survive the tortured confines of this hateful tomb... but he underestimated me. I thank you for freeing me from this devise of his." spoke the Librarian as he lifted himself up pulling himself free of the Iron Maiden. "You probably wonder to yourself how can I fathom your speech - it is the nature of some of my kind." He smiled again looking down upon the Archon now that he stood upright. "As I said I’m grateful to you for my release."

Forming a tight cordone around Drect her posse of Incubi clutched tightly at the long hilts of their glaives. Vorias watched their eyes glinting in the open sunlight as they stared at him intently. "We may have some use for you." replied the female Archon. "Do you feel so inclined to help us?"
Posted by Terminus Est at 12:47:00 AM No comments: 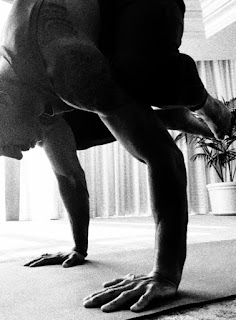 The many slaves dragged at the ends of the chains pulling the Iron Maiden up from the pit into the direct sunlight. Some their bones broke at the task screaming in abject pain.

“Silence.” whispered the Archon Drect. “We have uncovered an incredible find here so close to our dark world. The etchings upon the lid of the tomb date back over 30,000 years. This is a vessel of intense pain... a thing of raw of beauty.” She ran her forked tongue over the tips of her sharp fangs letting the wet blood run back down her throat as she momentarily gasped. “Unbind the ancient chains!” commanded Drect.

Shambling forward a Grotesque towered above her, its slabs of inhuman muscle flexing in unison as the beast lifted the axe. “So mote it be.” The teeth of the weapon bit into the chain links shattering them into dust. The gigantic lid slid off revealing what was within.

The court looked down to see a vast multitude of poisoned spikes bent and broken. A solitary figure lay with the trap unstirred as if caught in a dream of unbroken sleep. A somber smile split the pale face then its pale blue eyes opened drinking in the dire surroundings.

Drect looked down upon the ash white suit of armor covering the tombed body. The pauldrons and hood a somber blue as deep as some forgotten sea. At first she frowned in disgust then immediately fought against the immediate reaction. The body was larger than they had ever encountered and a sense of immediate peace radiated out out from its mortal coil. Warily she stepped back shrouded by her Incubi. “What are you?" she demanded.

Here is the order in which eighth edition codices and supplements were released including the second release for Space Marines and Chaos Space Marines:

It’s interesting to scan the list noting when the stronger codices dropped, some of which were factions along with their accompanying supplements. Of course the overall of strength of certain factions waxed and waned over the course of eighth edition due to the effects of things such as errata, FAQs and re-adjusted point costs for units via Chapter Approved.

We know that Space Marines and Necrons will get their codices first for ninth edition which indicates that the following new releases will not follow the original cycle, plus there has been some rumors regarding new factions possibly coming. Also typically Space Marines is the first faction to receive a new codex for the start of each new edition.

It appears the rate of release for codices will be much slower for ninth edition due to the pandemic and this has an effect on the meta as opposed to the rapid fire release at the beginning of eighth edition. While eighth edition had its indices, ninth edition has the Psychic Awakening expansions for the various factions. Ideally all factions can start a new edition now at roughly the same strength, but of course this is really not the case.