The Scouring - Part 2 - Execution and Discovery

Sisyphus slashed at the trio of Ultramarines with his long sharp talons floating above them as his wings unfurled beating against the umber night sky. Twisting right then left Plato parried the deadly strikes with his blades catching the extended tips of the claws. "You should not have come here." hissed the Daemon Prince.

"It is but your destiny." The Champion speared the Word Bearer through its throat with the Mirror Blade. Black ichor poured from the sudden wound spilling upon the volcanic sand below. Sisyphus disengaged falling back from the fight. Its warp infused blood smoked as it scorched the earth below. Plato leapt up driving his other blade into the daemon’s torso and savagely twisted. The fractal edge severed internal organs and split the vertebrae.

Falling to the hard ground Sisyphus righted himself but it was too late. The enemy fell upon him hacking through the daemon armor. Pure hate flowed through their veins as they finished him. The trio stood back catching their breath. They felt something alien and ancient towering above them. In perfect unison they turned to see a gigantic statue of a Space Marine carved into the mountainside. 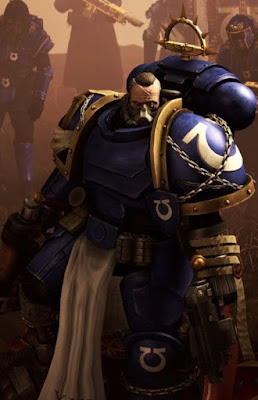 All along the Slaaneshi line the Noise Marines boisterously posed brandishing their deadly ranged weapons. Sisyphus, their exalted Daemon Prince, postured pointing up towards the red dawn. His wings unfurled as leapt into the crimson sky. "Fire upon my mark. We are the Bearers of the Truthful Word." They all saluted the unholy beast in their deeply saturated red armor.

A crescendo of sound split the sky as a lone blue drop pod crashed down imploding into the barren earth. Before they could react the doors exploded outwards showering molten shrapnel upon the filth. Stepping down from the forward most ramp descended a Champion with a Victrix Honour Guardian on either side. He stood taller than Primaris drawing a pair of long paired blades. Upon his chest hexagrammic wards deeply etched into the hardened armor blazed in the forgotten language of Colchis screamed in their minds as they all looked upon the glyph "Kneel".

Sisyphus snarled drawing his long forked tongue over the fangs jutting from his twisted malformed mouth. Charging into the masses blaster fire the trio of Ultramarines crashed into the Word Bearers. The Champion struck right and left striking them down, limbs were sundered and foul visceral split from the rent crimson plates. Sensors built into his armor guided each stroke.

Swooping down into the trio the Prince tore at the Victrix with its steely talons. Their shields held repelling the Fallen’s attack as the Chapter Champion continued his rampant killing. Time seemed to stop as the last of the Word Bearers fell, cleaved apart in the clinical rampage. Turning to face Sisyphus Plato pointed his bloodied swords toward the Daemon Prince taunting him. "Kneel".
Posted by Terminus Est at 2:50:00 AM No comments: