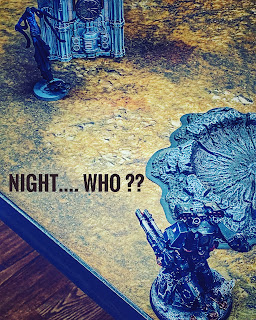 Iron Hands vs Necrons
Had an open war game yesterday at my FLGS. The mission objective was to destroy more enemy units than your opponent. The twist was -2 to cast psychic powers and they couldn’t be rerolled. The ruse was every unit gets +1 attack in melee. Deployment was modified Hammer and Anvil. Battle size was 2000 points.
I brought an Iron Hands battalion:
Chapter Master on bike, thunder hammer and storm shield
Chief Librarian - force sword
Iron Father Feirros
Five man Intercessor squad - stalker bolt rifles
Five man assault Intercessor squad - master crafted thunder hammer
Five man Infiltrator squad - Helix Gauntlet
Chief Apothecary - Selfless Healer
Relic Contemptor Dreadnaught (character) - twin lascannon, missile launcher, chainfist, plasma blaster
Eight man Relic Terminator squad - chainfists, plasma blaster, heavy flamer, combi bolters
2x Company Veteran - storm shields & chainswords
4 man Eradicator squad - multi-melta & heavy melta rifles
3 man Devastor Centurion squad - lascannons and hurricane bolters
My opponent also brought a Mephrit battalion:
Overlord
Skorpekh Destroyer Lord
Nightbringer (OMFG!!!)
20x Warrior - Reapers
15x Warrior - Reapers
5x Immortal - Tesla
Royal Warden (Veil of Darkness)
Gauss Walker
10x Lychguard - Sword & Board
3x Canoptek Wraith
5x Scarab
5x Scarab
Going into the game I felt like I had a big advantage in terms of long range high damage fire power, which turned out to be true. Both armies are highly resilient which made the game quite interesting… my goals versus the Warrior blobs was to parse them down as much as possible each turn but not be frustrated if I couldn’t destroy a unit per turn. Also I knew I had to carefully manage the Nightbringer… he can just go through any army quickly and throws out a lot of mortal wounds. I had a few tricks up my sleeve to catch that monster off guard.
I put my terminators in deep strike reserve and Eradicators in strategic reserve. I deployed most of my army out of enemy line of sight and infiltrated the Infiltrators forward but also out of line of sight. My opponent also had a conservative deployment but setup close to his line.
Luckily I got to go first and got up my buffs for the Centurions and Relic Contemptor. Shooting was fairly brutal bring the xenos walker down to one last wound and snagging three wounds on the Nightbringer. In return my opponent veiled the big blob of Warriors up front and managed to bring down one of my Centurions. The Nightbringer was only able to kill one Infiltrator with its mortal wounds jank… my ignore injury rolls were on fire! The Nightbringer couldn’t charge since it advanced luckily.
2nd turn I moved the Infiltrators up to deal with Nightbringer. I also brought in both the terminators and Eradicators from reserve. Shooting saw the first blob of Warriors gunned down and the walker was destroyed. My Infiltrators were able to strip 5 wounds from Nightbringer using some sweet strats with combined shooting and melee… the sergeant managed somehow to survive the close combat locking the Star God in place. The terminators made a big splash in the shooting phase helping to bring down the first Warrior blob but unfortunately my Eradicators bounced versus the Wraiths - my opponent’s invulnerable saves were red hot.
In return the Wraiths hit my Eradicators in melee shrugging off the melta overwatch like nothing… damn robots !!! On the flip side the Necron shooting was like light rain inflicting minimal damage. Of course my Infiltrator sergeant was snuffed but he will be always remembered as a true hero, helping to bring the Nightbringer down to only one wound and keeping the beast out of my lines.
Third turn was epic. The highlight was my Relic Contemptor gunning down the Nightbringer in overwatch like a dog. This was the final turn as the store was getting ready to close. When the smoke cleared I had killed one more unit than my opponent. I still had a lot of my army intact, losing the Infiltrators, Eradicators and Intercessors.
It was a good game and a sweet victory for Ferrus’ boys.