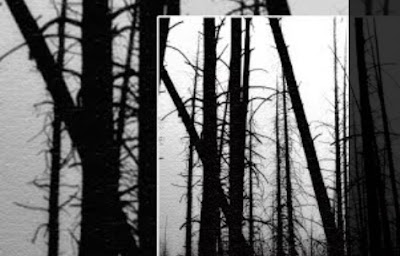 Gigantic plumes of superheated steam boiled above the mountain top evaporating long frozen ice. Three figures loomed within the icy haze leaping down from one piece of solid rock to the next. Drawing the mirror blade from its dark leather scabbard the Champion hurled himself into a nearby long throng of startled Word Bearers. The blade sang like a steel rattle as Plato beheaded those closest then rended loose limbs, rupturing their wine red armor plates. Fresh blood poured from the sudden wounds flowing into the icy swirling water beneath them. A large wall of steaming water engulfed them all knocking them loose. As one they all tumbled down into the valley below. Plato quickly righted himself holding the mirror blade submerged under the the rushing water. A pair of Greater Possessed rose up on either side. Ancient runes cut deep into their armor shone bright emitting sickly green warp energy. The blade struck before either could react slicing through tendon and long hardened bone. They fell to either side as the Champion slipped past them to re-engage those whom had momentarily escaped his reach.

The traitors fumbled grasping at their weapons but they were too slow to react. Plato made short work of them all as his two Honor Guard reached him again. Back to back the trio continued to fight taking full advantage of their initiative. Ancient mauls and bent blades crashed harmlessly against the stormshields. Hissing with rage against gritted teeth the Champion set to work again decapitating each and everyone of the last of the living traitors. They emerged from the fray coated in blood marring their bright blue armor. Looking down a brief moment at the fresh pile of dead the Ultramarines stepped onto flat ground pulverizing the scattered bone and pieces of rent red armor.

"Bring forth your very best now." Plato spoke through the grille of his helmet.
Posted by Terminus Est at 12:03:00 AM No comments: