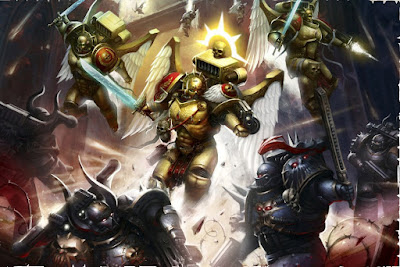 This story takes place in an alternate universe where maybe justice is more revered ...

Smoke poured from the craters as alien attack ships flew above the Space Marines. Vorias concentrated, maintaining a kine shield to protect his command squad. He watched in silence as the aliens quickly advanced pouring fire power down upon them. "Open fire." he commanded. Their bolters barked firing into the black tide. Suddenly reinforcements arrived cresting the swollen hills. The Librarian looked up to see Kharn charging down with a huge squad of Inductii. Their chain axes revved as they hit the line, the Aelderi began to fall back as the mad Berserkers carved into them. Limbs were shorn off and bones pulverized.

Vorias voxed to his squadrons to break away from the melee. As one his World Eaters left their trenches quickly moving over open ground to take a new position. "Open fire."  The Aeldari mesmerizied by the sudden emergence of Kharn and his Inductii were caught off guard, bolter fire tore threw their lines shredding them to a bloody pulp. "Hold." The World Eaters crouched beside Vorias waiting for his next command. They felt the ground heave beneath their armored boots as something enormous loomed over the dark hills. It’s crest rose up revealing a Wraith Knight striding towards the battle.

There came a wicked sound from above, a high pitched scream of burning jets as a golden figure descended from above. The lone Blood Angel wore a glinting death mask, an axe in one gauntlet and a long cutlass gripped tight in the other. Azkellon dove dropping like a burning meteor falling upon the alien revenant. The Librarian watched as the Angel attacked. The construct screamed in pain as the weapons fell to their task.

Azkellon walked away with a noticeable limp in his stride. The bodies of butchered xenos littered the bloody battle ground. "Kharn." said the Captain of the Blood Angels Sanguinary Guard through his vox as he strode closer to the throng of close by World Eaters. The vox gave a mechanical tint to his voice, it sounded deep and menacing. "You are charged with war crimes."

Kharn laughed. "You are either brave or stupid. Who put you up to this Azkellon?"

"By decree of the Emperor you are found wanting. Lay down your arms and surrender now." replied the Blood Angel as he continued to limp forward towards Kharn. "My Liege is gifted with the prescience. Those who will turn to the fell forces must be put down to prevent the rift. You have been found wanting." His jump pack suddenly ignited as Azkellon leapt up covering the last of the open ground in a single leap. Kharn dropped back raising his axe in defense and snarled. The Berzerker felt the bite of the butcher’s nails clamping into his spine as he spasmed.

Azkellon was swift as a ghost driving his cutlass into the side of the Betrayer. His strong hand gripped the hilt turning the blade as he rammed the tip through Kharn’s back. The World Eater saw pitch black for a moment then struck back with his empty gauntlet delivering a crushing blow to the golden death mask. The foil peeled away revealing a pale stern face with glittering eyes burning like raw emeralds. The Blood Angel ran his tongue over his razor sharp fangs then spat black acid blood into Kharn’s eyes. The Berzerker yelled as he felt the orbs melt back info the sockets. He was blind.

Azkellon’s axe struck in a looping figure eight decapitating Kharn with the savage strike then the Betrayer tumbled sprawled across the sordid dirt. His body spasmed.