Sub Commander Kroll removed his helm revealing a severely scarred face with sections of melted flesh and poorly stitched flaps of rotten skin. His lips had been cut away revealing his long incisors. The flesh on his neck was scalded and scaly. His retinue involuntary cringed at the sight of his marred flesh. "By now it should come as no surprise an Imperial assassin is running amok through our company." He gnashed his teeth and spit black bile through the gaps. "The assassin must be found and made an example to everyone. This is your utmost priority."

Kroll's first Lieutenant Hasor rose. "Research has shown the Imperial assailant has certain attributes from various temples such as Eversor and Cullexus. We are conducting sweeps throughout our company but so far the assassin has eluded us."

Kroll motioned to Hasor indicating he should sit again. "Watch this vid carefully." The main screen dropped down and activated. There upon the screen lay the dormant bodies of three dead Legionnaires. Their silvered armor had been removed. They were bound, gagged and tied. Fingers and toes had been amputated and their eyes dug out from the sockets. Their skins had been peeled away all over revealing muscle, tendon and bones. Some of the limbs were broken back in unnatural angles befitting the uber violent act. Dried blood was splashed against the walls coating the area. Their heads had been cleanly severed all three hanging upside down from chained hooks attached to the ceiling. A stem of broken vertebrae stoke out from the open necks. Some ancient language so vile as to cause trauma upon immediate sight had been worked into the smeared blood. They all looked away then the screen folded back up into the ceiling again.

"This is the work of a sick mind." said Kroll. "The assassin must be terminated if we are to succeed here in this war with the Raven Guard. Get to your tasks."
Posted by Terminus Est at 10:08:00 PM No comments: 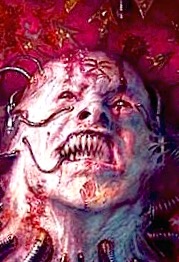 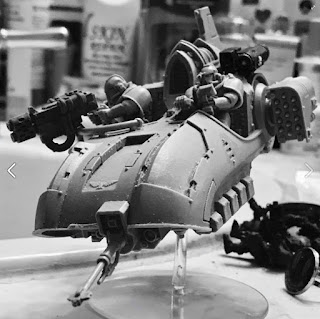 Sitting beside the cypher terminal the savant silently awaited orders. The Commandant of the Sons of Horus detachment removed his helmet placing the mic to his neck then began to dictate orders. Seamlessly the savant began to code the message and transmit over the encrypted communications channel. The stratagems meant nothing to him but still his entry was flawless, an Iron Warriors dawn raid would be executed in several hours as originally planned. The Honor Guard of the Commandant stood at point bolters trained into open space.

There came the gentle sound of a creak within the tight confines of the enclosure. One of the Honor Guard gagged as the tight razor wire garret slipped around his armored neck and cut into the piece slicing into the skin. Before anyone could react the helmet hit the deck. Hot blood gushed out spraying the wall behind the dead traitor. The assassin's needle pistol slipped out from the black leather holster stitching well aimed shots into the lenses of the remaining Honor Guard. Cutting through the polished exterior the razor shards entered their brains equally killing them as well.

"Hello." said the assassin in perfect Chonthic pitch. He reached out catching the Commandant by the neck and broke the vertebrae with a quick twist of the wrists. Carefully he dropped the dead weight from the chair then sat down beside the savant eyeing him carefully through the open sockets of his skull mask. He took the mic attaching it to his larynx then began to continue the orders.

"I apologize for the interruption but I have just been informed of an immediate change of plans." The assassin repeated the code word then continued. "The dawn raid has been cancelled. It is in our best interests to let the Raven Guard continue forward into a more vulnerable position. Your next orders will be transmitted at oh seven hundred hours. Hail Horus the Warmaster."

The assassin then gave a hand signal to terminate transmission and the savant interrupted the link. Slowly the assassin drew forth the needle pistol placing the muzzle against the right temple of the savant then squeezed the trigger.
Posted by Terminus Est at 10:01:00 PM No comments:

Fire belched from the molten seams of the ordnance cannon as its recoil shook the entire station. The tech marine manning the targeting array watched silently as the blast imploded miles away decimating enemy infantry. "Reload." came the command. Servitors bustled about in the heat radiating from the immense barrel cracking open the rear arming hatch. Clouds of blackened smoke and soot poured out coating them in a shroud of death. A track lowered down towards the opening mounting the glistening threaded grooves. A large servitor more machine than human grasped at the clutch pulling it down with all its might. The next red missile slipped into place then the smaller servitors worked the hatch shut again.

The tech marine noticed a silent alarm bleating at the exterior of his vid display. It indicated an intruder was present but looking about quickly he saw no sign of the enemy. Silencing the alarm he returned to the task of re-aligning the ordnance for the next barrage. One of the servitors then crashed to the ground, a huge rent torn across its armored chest, oily bile spilled from the tear. Activating his servo arm the tech marine swept the immediate area in infrared searching for any unique heat signature but there was none to be found.

"Alpha Prime activate." he ordered bringing a huge battle class servitor online. Its buzz saws began to whine as they spun up turning at blinding speed. Another servitor also crashed to the iron battle mat, its head ripped from the shoulders. "Search and destroy ." the tech marine ordered Alpha Prime. A whisper sounded gently through the din and a gaping hole appeared in the forehead of the huge servitor then it fell to its knees and toppled over, the buzz saws grinding to a sudden halt.

The tech marine could just make out the trace of a ghost splayed up towards the enclosed ceiling then it vanished. The remaining servitors started to panic abandoning their tasks. "Return to your duty now." ordered the tech marine. "One more blast should stave off the enemy advance for good." He heard the whisper again and this time at a staccato clip. One by one each the servitors fell, heads and limbs shorn free. He fired his bolter aimlessly into the ceiling stitching the air with random blasts of bolter fire. "Show yourself."

The heated air before him shimmered as the silhouette of a well muscled body took shape. The combatant wore a black body glove and a leering skull mask. The assassin's eyes shone through the sockets staring straight at him. A blade came up swiftly beheading the tech marine with one well measured blow. The assassin kicked the helmet aside then leapt over towards the cannon. Quickly placing one small micro melta grenade after another clamping them along the length of the exposed long barrel the assassin armed the last one then stole away.

Several minutes later came a huge explosion sounding into the night as the ordnance station blew apart. Several miles away the vanguard of the Raven Guard armored division continued its advance towards the Iron Warriors camp.
Posted by Terminus Est at 3:54:00 PM No comments:

Email ThisBlogThis!Share to TwitterShare to FacebookShare to Pinterest
Labels: LVO

Some pix from LVO

Email ThisBlogThis!Share to TwitterShare to FacebookShare to Pinterest
Labels: LVO 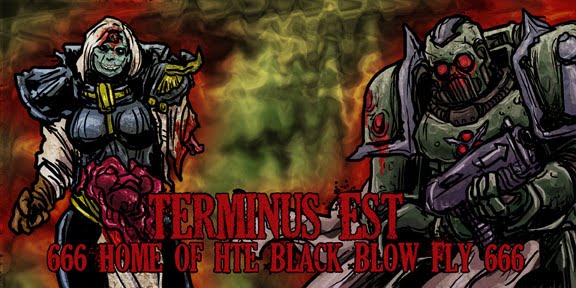 So I'll be at LVO this weekend. I have heard there will be 400 players in the 40k championship this year and that is really amazing ! If you follow my blog here you know now I don't play 40k any more. I will playing in the Horus Heresy mega battle on Friday and conducting some interviews with top 40k players on Saturday. I want to know what they think would make 40k a better game. I'm still a very competitive player at heart and love tactics the best. My favorite two phases of the game are the psychic phase and the assault phase. The movement phase is the most important phase and probably the hardest to master.

Keep an eye out here starting Friday... lots of pictures, some video and interviews. It's going to be an amazing weekend.
Posted by Terminus Est at 9:33:00 PM No comments: