Knight-Errant escorted by Angels of Death 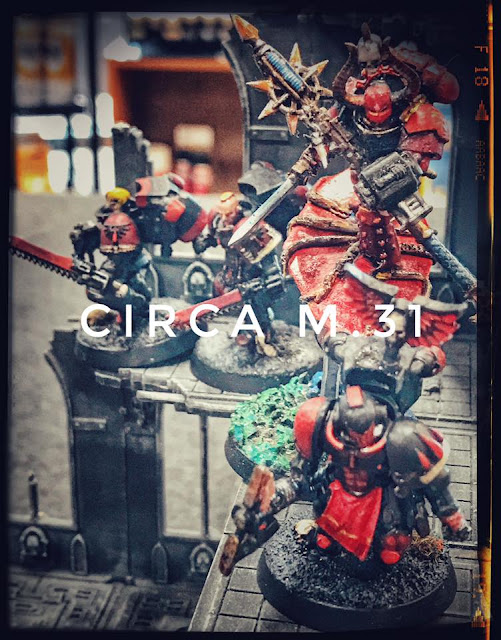 A black pool of poisonous liquid mired quietly under the fading light as the sun sank low and dark clouds began to roll over the sunken horizon. The barren landscape seemed empty except for the Sons of Horus and Templars. Both champions stared across the pool, neither speaking.

Sigismund looked up to see a swarm of harpies suddenly crossing over between them. One fell from the sky directly towards him. Immediately he struck out with his sword chopping the daemon in twain splitting it right down the middle. Goops of pungent black bile exploded from the wretched remains of the warp creature spilling down upon the loyalist champion. Sigismund cursed silently as the sticky fluids filled the lenses of his helmet blinding his sight.

The Templar then heard Abbadon issuing a formal challenge. "So be it." he replied as he drew upon his enhanced auto senses immersing himself in his four other senses. He could smell the trepidation rolling off Horus' most favored champion and the crunch of gravel crushed under his terminator boots echoed within his ears. His tongue seemed to taste the hot traitor blood flowing within the corrupted vessel of the Despoiler.

Sigismund adopted a defensive posture dropping into a low crouch bringing up the black sword gripped tightly with both his blackened enameled gauntlets. "There is no joy in this galaxy greater than slaying your enemy." came the deep voice of Abbadon. The Templar listened closely knowing from which exact direction came his foe.

Slashing out with his blade the sword cut straight up striking hard against Cataprachti armor. Sigismund could smell the burning arcs of eldritch energy pouring out from the fractal edge of the black sword slicing through the hardened admantium outer layer. "You were saying?" he replied goading his enemy.

He imagined Abbadon moving towards his purposely exposed left side. The high pitch of an energized power fist screamed out into the dark void as the traitor struck his first blow. Sigismund ducked underneath the massive weapon driving an armor knee up into the Despoiler's groin. He heard Abbadon groan as he shot off to his right.

Quickly swinging his head around to clear his vision Sigismund bound into the pool of poison. The sweetly sick ether eminating from the bile ate away the thick dark harpy matter. His sight returned just in time to see Abbadon rushing straight towards him striking a second blow with his massive power fist.

Involuntarily flinching the traitor's fist struck him hard in the shoulder knocking him down into the black pool. Sigismund righted himself sloshing through the venomous fluids suddenly emerging on the far side. It was a death blow that would have instantly slain any other combatant but there stood the Templar erect squarely holding the black sword in a new posture of direct attack.

Abbadon cursed in frustration as he crossed through the pool as well, careful to maintain a safe distance from the outstretched long blade. "Well played." said the traitor as he ascended from the dark quagmire. "Well played."

Sigismund struck out like an unwinding vyper driving his sword straight towards the traitor's chest plate. The tip of the double edged blade hit true driving through the armor piercing both lung and heart. "There is no joy in this galaxy, only duty." said the Emperor's Champion as he tugged loose his sword. Abbadon felt numb as his limbs grew stiff and cold.

"I shall leave you here to bleed out for all your chosen to see." Sigismund grunted as his sword pulled loose again. "Your treachery is predictable and that makes you vulnerable." Sigismund was already backing away from the rigid figure watching ever intently.

"We shall fight again another day, mark my words dog, and it will be my day." The traitor's joints had swollen and were stiff, his tongue like super heavy lead as he slurred the last remark. Already his chosen has come to his side to aid him as they lifted him back up leading their beaten champion slowly back towards the waiting assault claw.

He turned ever so painfully to look back one last time. The Emperor's Champion was nowhere to be seen now and the black Spartan had vanished back into the night.
Posted by Terminus Est at 9:35:00 PM No comments: 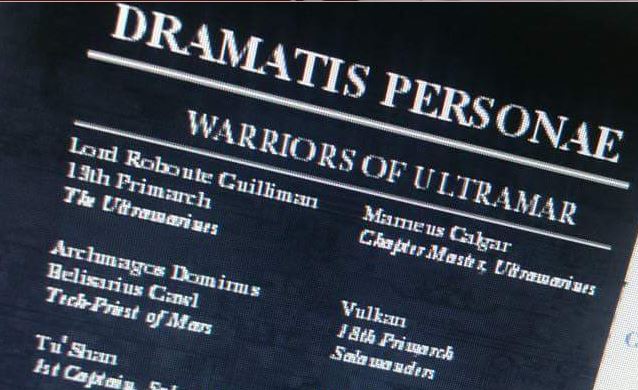 This might be a repeat article but one well worth repeating and this time I'll try my best to provide more detailed information.

Adding an allied detachment to your main force is a good method to spice up your army and shore up some abilities. I've always been a big fan of Blood Angels and love what they've got so far for the Horus Heresy. While Blood Angels as a Legion do not have a full set of rules yet with special characters and special units they do have their own Leguon rules and some special wargear, both of which are full on win ! I have built the following allied detachment to fight along side my Templars:

Note that I run a Knight-Errant as an HQ for Templars with a jump pack and narcethium who joins the combined BA squad (Chaplain, Apothecary and Assault Marines). They can deep strike together, do not scatter and can only be snap fired by the enemy the turn after they arrive... so you can put them in a key location and they are very survivable. The Knight-Errant is also a level 2 psyker whom I use to cast blessings on my Templars. The Blood Angels combined infantry unit are actually designed to hunt armor primarily rather than melee versus enemy combat units. Of course being jump infantry they are very fast which combines well with my Templars. They can pick off weaker enemy units such as tactical Marines if need be.

We all know just how great is the Leviathan now - he comes down turn one and is a dakka monster the first turn... more so with the pair of assault cannons.
Posted by Terminus Est at 12:56:00 PM No comments:

Brother Fuentes was a veteran assault Marine and one of the first to fall to the Death Company. His lucid dreams of the death of his Primarch drove him to madness. Later he was entombed in the sarcophagus of a Leviathan and slain many traitors. 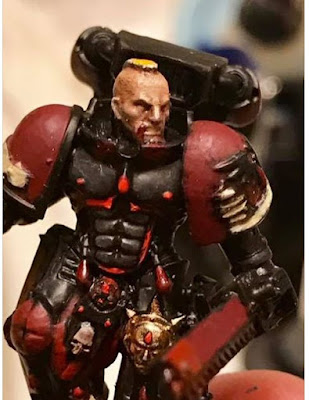 Email ThisBlogThis!Share to TwitterShare to FacebookShare to Pinterest
Labels: Mechanicum

The binary sun had set casting twilight distilled beams of umber hue across the sunken horizon. The dead littered the ground piled high stacked up on top of each other. A few close to death gasped their last few breaths then were silent as the wind began to howl. On either side stood the survivors, each a mixed lot formed from the various Legions. Hardened veterans from Ivstann clutched at their chainswords and bolters staring across the open ground.

Overhead a gigantic form shaped like an ancient beast of war descended slowly shaded obsidian black flicked in speckled bronze and hard dark dried blood. The Kyhbardis assault claw blast burning flame from its massive exhaust pipes scorching the dead... no respect or remorse for those that has served the cause. The last of the living quickly scattered like rats moving towards hard cover. The craft settled down opening its ceramite plated orifice from its underside. One after another black clad Justearin leapt down unlimbering their weapons. One towered above the rest unmasked showing his pale scarred face. One limb terminated in a huge power fist and he carried a long fractal edged sword in his free gauntlet. The Justearin bowed on one knee then rose again scanning the immediate vicinity.

Their came a shrieking rumble as a black Spartan lumbered into view. Dark Templar crosses covered the assault ramps. Skulls taken from recently slain Heretics chained across both sides hanging down swung back and forth. Its quad lascannon arrays swung in training on the assault claw then the ramp fell open. A single warrior emerged from the darkness within the tank. Clad from head to toe in a suit of stark black artificer armor... no other color not even a shade. The helm visor split across the brunt face plate black as well. A long black sword was strapped across his back, the hilt rising behind him like a striking serpent. "So we finally meet here and now." said Sigismund the Emperor's Champion.

There are no wolves on Fenris ...