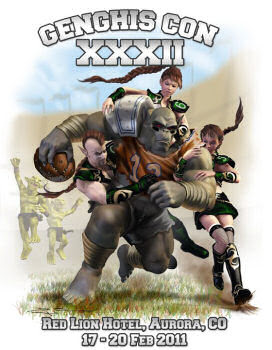 Well it was a great weekend and my best performance so far at a GT. Most all of the armies there were painted and lots of nice looking ones to boot. I enjoyed every game and never once had to call over a TO. All my opponents were awesome.

> The Sanguinor (really did very well throughout all my games)

NOTE - I've found it very useful to bring both a power fist and thunderhammer in the small squad as this it the best way for them to smash tanks.

The sergeants are true monsters with either a power fist or thunderhammer and a stormshield. They are hard to kill due to the 3++ save and can wreck face. Invariably if the assault squad is whittled down to only the sergeant he can still score and is highly mobile. One of these sergeants also receives the Sanguinor's Blessing and becomes effectively a 2W Captain (+1A, +1I, +1WS and +1W). No advantage for initiative buff but he's a monster with 3/4 S8/9 attacks at WS5 and can't be singled out in close combat as well!

So here is a brief recap of my five games (batreps to follow this week for those interested). There were two games on Friday night then three more on Saturday.

1st Game vs. Tyranids - Annihilation, Spearhead deployment
My opponent was running a NidStar (Swarmlord, 3x Tyrant Guard w. lashwhips and a Prime w. dual bone swords). I won the roll for deployment and opted to go second. We got in five full turns. He had a couple of Tervigons spawning lots of termagants so lots of easy killpoints for the win. There was a huge building just off the center of the table. Luckily for me my opponent placed the NidStar on one side of the building and the bulk of the rest of his army on the other side. He also had the Doom in a spore which he dropped on the center of the table. I brought in the bulk of my army on the opposite side of the building away from the NidStar and went to work assaulting the termagants for easy kill points. My main units (Dante and his posse plus the Sanguinor) got tied down when I assaulted into the building to attack his Tervies and some Hive Guard - T6 can slow you down a bit. Of course Dante could use Hit and Run to break off, which I did just in time to keep him and his posse out of harm's way as the NidStar began the long trudge around the building. The Doom didn't really get to do anything as his spore landed in the middle of the table and the fighting took place on the other side of the building. I decided to attach the Chaplain and one Priest to the Vanguard vets and that combination was quite deadly (of course no Heroic Intervention)... I believe over the course of the game they destroyed 3 to four squads of gants plus one of the Tervies and a Trygon as well. One of the assault squads was busy killing gants as well so a strong win in the first round with few losses overall. The win boosted me up to the top ten tables where I would remain over the course of the next four missions.

Next up the second round was versus Necrons this time - Capture and Control with Pitched Battle for deployment. I placed my objective far back in one of my table corners and sent my whole army via deepstrike to capture his objective placed back along the middle of his long table edge. I phased out the Necrons by the fifth turn for a big win. At first I was a little worried as my opponent's dice were hot but FNP really saved the day and worked better than WBB... go figure that one. I flanked him on two far sides and slowly worked my way into the middle of his army line. The Necrons were no match versus my army in assault.

So that wrapped up the first day (Friday evening). Got out around11:30pm and went straight to bed!

I'll post a synopsis of the last three games tomorrow.