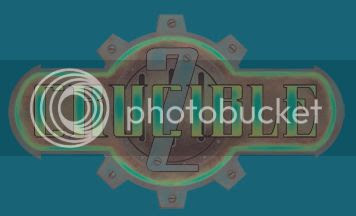 So I have decided to post another batrep. This was the first game of the second day versus none other than Teddy Woody. He brought a list very similar to what he fielded at BeakyCon last year... Lots of five man Warrior squads in Night Scythes, lots of Canoptek Scarabs, some Canoptek Spyders, lots of Canoptek Wraiths plus Immotekh with a large squad of Warriors and a Chronotek. He doesn't really have a lot of shooting other than his Night Scythes and Immotekh's lightning - I know I have to take advantage of this mismatch plus luckily for me Coteaz gets the Divination power Misfortune which is a malediction that forces an enemy unit to reroll all successful saves. I am counting on my Tesla and psycannons to insta-gib his Scarabs and clear them out. There is a big piece of area terrain in the middle of the table that was a key to the win.

The primary objective was the Relic.

The first two turns Teddy farms his Scarabs moving forward while the Wraiths advance as well. I hold back my two Necron Lords and let the enemy advance. My guns start to blaze dropping lots of Scarabs and a few Wraiths. Teddy rolled poorly for Immotekh's lightning throughout the game. I have one brood of my own Scarabs and I move them up, spreading them out to bubble wrap my infantry. I place the Scarabs so that the enemy Wraiths can't jump over them. My Scarabs absorb the first charge then I shoot some more finishing off most of Teddy's Scarabs and drop some more Wraiths... One squad of Wraiths is downed to a single model. Teddy's Spyders are moving in as well entering the central piece of terrain. My Destroyer Lord charges the large squad of Wraiths and ties them up for the rest of the game.

The next turn the Spyders charge through terrain so they swing last. My daemonhammers counter assault then I activate their Force to finish off all the Spyders. Immotekh and his squad run up to grab the Relic and run back away. My Overlord in his douche cannon charges them to contest the Relic. The game comes down to secondary and tertiary objectives plus the bonuses. I end up winning 5-4. It was one epic battle. Misfortune really helped a lot to thin out the enemy ranks. We both drop a bit in the overall rankings but we both still have a chance to win it all with the last game.
Posted by Terminus Est at 9:21:00 PM