Paladins vs Purifiers for Necrons with allied Grey Knights 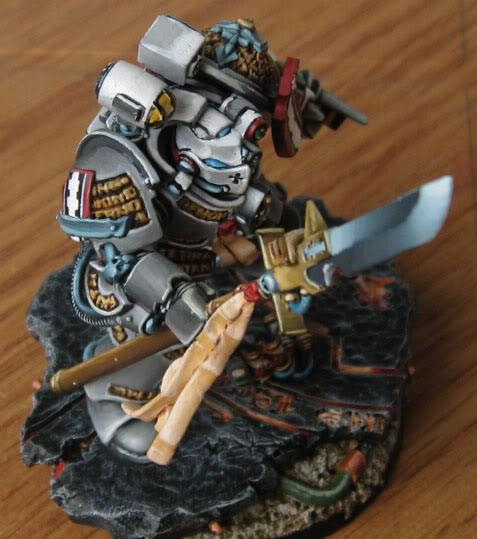 So I have been having some good success with my army... Very balanced for the current state of 6th edition. For my allied choices I run Inquisitor Coteaz, one full Grey Knight Strike squad and one full squad of Purifiers. The Strike squad is there to score, shoot and lay down Warp Quake. The Purifier squad looks like this:

I am thinking about switching out the Purfiers for a five man Paladin squad... Something like this:

By the way these units are both geared towards my 1850 point list. I'd probably upgrade one of the Paladins to an Apothecary at 2000 points.

Psybolt ammo isn't worth it for just three stormbolters and those points can go a long way towards the warding stave. Overall not quite as much shooting and a few less attacks in melee but there are plenty of advantages...

•More resilient:
- 2+/5++ save
- just as many wounds
- better investment for the warding stave
•Automatic activation of force weapons
•WS5 versus WS4
•Can always fire eight psycannon shots at full BS
•Look Out Sir! works better for Coteaz
•Option to attach Coteaz to Grey Knights if I want to deep strike the Paladins (better investment in the Strike squad and more versatile overall)

Here are the number of melee attacks that ignore 2+/3+ armor saves for each unit:

I think the two less attacks overall are offset by WS5 versus WS4.

Finally there is the question - which is the better psychic power, Cleansing Flame or Holocaust? To me it's a complete toss up and they both have their advantages. My current army list has lots and lots of shooting so Cleansing Flame is not so important as a factor.

So which unit do you think is the better choice?