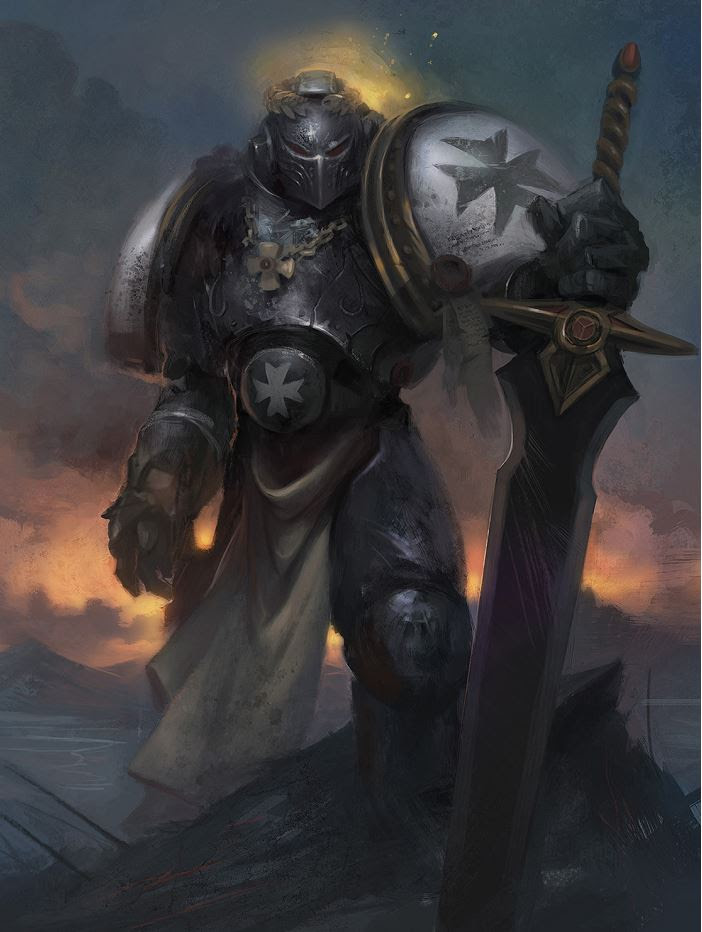 Another day... Another duel...

There came a shrieking sound that throbbed at the apex of the hidden temple. It pulsated growing in frequency until it seemed to moan like a wailing banshee. Slowly came the form of five gigantic beings shivering into material form until fully solid. They were clad in the blackest armor with thin ribbons of gleaming gold. In the center stood the tallest warrior, his hair pulled up tight in a long mane of dark hair. His eyes blazed like pieces of gold as he scanned the immediate area quickly taking in his surroundings. One arm terminated into into a huge metal claw with twin bolters bolted onto the outer side. In his gauntlet he carried a long sword that screamed his name twisting it like an angry serpent. Overhead the clouds momentarily broke revealing a pair of silvered moons. "This is the place." said Abbadon. The four Justaerin spread out like a shield as they broke from the teleportation beam then it vanished.

The temple was small with its walls built low to the ground. Its doors were open and hallow light shone from within the barrier. Abbadon stepped up to the doorway with a terminator on either side and peered into the sanctuary. The light felt like cold fire as it touched his face but he blocked out the pain. Inside a single servo skull floated. "Intruders..." its metallic voice emitted then was silenced by a bolter round blasting it into a spray of fragments. Abbadon stepped across the boundary meeting with an unseen resistance that pushed him back. Gathering his strength he broke through the invisible barrier. He looked back to see the doorway was sealed off now.

"What brings you here?" came a hidden voice from a high throne in the back of the sanctuary. Sigismund rose up towering above the throne. He was covered from head to toe in pitch black plates of void hardened armor with only a stark white Templar cross etched upon one of his shoulderpads. His weapons were chained to his wrists with thick silver cables that gleamed in the soft light. In one gauntlet he held a long black doubled edged sword and in the other was a buckler thrown back against his arm.

"We must fight." said Abbadon.

"To see who is the best?" replied the champion. "I'll hand your head on a platter."

"You are truly so arrogant, just like your father. Once we were both captains so long ago. Did you tire of your dark conquests, seeking a true challenge?"

"This is according to prophecy." said the Despoiler. "I need your weapons and armor. They are of no use to a dead man."

Sigismund laughed briefly then spoke again as he donned his black helm. "Surely you know this is holy ground upon which you stand. You're presence can't soil it."

Abbadon heard a sudden clicking sound as his sixth sense began to warn him. An array of automated lasers dropped down from their hidden mountings sighting upon him. One after another they fired scóring his black armor. Sigismund laughed again as he charged. "Let us see how good you are without the aid of your fell warp powers." The black sword sang as it sliced through the air carving a path to the enemy. Its sharp tip cut through his scalp detaching the top knot. Sigismund seemed to dance between the lasers strking blow after blow upon Abbadon then the brunt of his shield caught the Despoiler square upon the chin causing him to bite his own tongue clipping off the forked tip.

Slowly the doors parted open from the temple and Abbadon stumbled out, his armor cracked in many places and one of the claws broken off the Talos. The Justaerin said nothing knowing better than to speak. "We must teleport back to the ship. There'so nothing here for us."