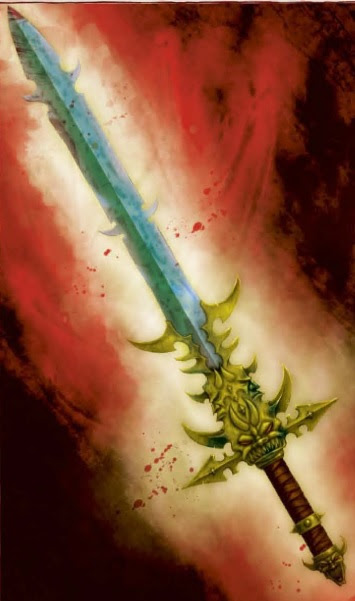 Being a daemon weapon, Drach'nyen could be considered a living being and its appearance can change dramatically. The weapon normally appears to be something akin to a two-handed sword, except that Abaddon wields the weapon with a single hand in conjunction with the Talon of Horus. The guard of the weapon tends to be golden in colour, with a leering face of a demon just above the handle. The ricasso of the weapon has spikes protruding from the sides as well as outward from the blade, and the blade itself is blue with red, tormented faces writhing across its surface. It is unknown if these faces belong to daemons or the souls of those the blade has killed over the millennia.

A monstrous, golden-skinned stranger led Abaddon to the weapon under the Tower of Silence on Uralan. To take the weapon from its crypt, Abaddon had to pass several tests given to him by the Chaos Gods in order for him to be proven worthy, as the gift is only given to those who were worthy of their dark powers.

The mighty daemon weapon draws its prodigious power from the bound essence of a writhing warp entity that can rend reality apart, named Drach'nyen. The Warmaster uses this weapon as a symbol of his authority, and with it has led his infamous Black Crusades, as well as using it to effect in battle.
Posted by Terminus Est at 12:23:00 PM