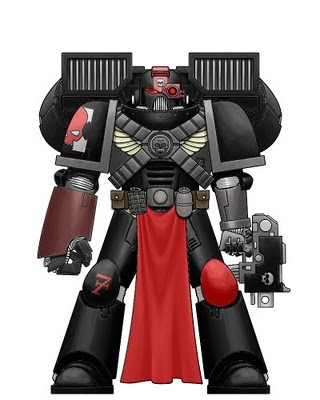 The Chaplain spoke through his vox on an open channel. His voice was stiff and amplified. "You are all traitors to the Imperium of mankind. To put it simply I see before me a group of back stabbers without any dignity. You have no redeeming values and would even turn on one another if it suited your needs. We are gathered here seeking vengeance for your betrayal at Ivstann. Not one of you will make it to Terra."

The sky above had turned dark umber red and drop pods began to fill the sky. "Who are you to stop us?" said the Justaerin wielding twin power swords. "We follow the creed of our Warmaster." He raised his swords in unison giving the signal to charge. The Chaplain leapt down moving at a blinding clip as he issued a challenge. His long sword seemed to move like a snake blocking enemy blows and cutting into the black armor. The rest of the Blood Angels descended upon the Sons of Horus also moving with prenatural speed.

Captain Arwent watched the two sides trade blows. A drop pod crashed down suddenly blocking sight. It's doors exploded out and more Blood Angels entered the fray firing their bolters as they emerged.
Posted by Terminus Est at 7:54:00 AM