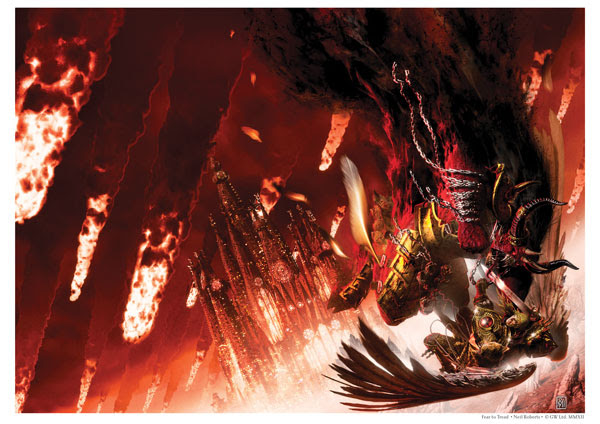 So I finally finished reading the novel this week while I was out of the country... Maybe I should have entitled this review as Fear to Read... Just kidding - it wasn't that bad. I also read another Horus Heresy compilation consisting of several short stories and a few novellas. My feelings regarding the Blood Angels novel are mixed... It did seem to follow along the lines of established background and it also showcased the Legion and it's Primarch Sanguinius as one of the best at the art of war in the 30th millenium. Comparing the writing to some of the stories in the other book though I just found it lacking and think it could have been better done overall.

I give Swallow's effort a very generous rating of three stars out of five. If you are a big fan of Blood Angels then you should read it as there is some interesting development of characters such as Azkellion (commander of the Sanguinary Guard) and Captain Amit from the Fifth Company who was the original Flesh Tearer. The depiction of Sanguinius is okay but nothing really special in my opinion. I did find the development of the Red Tear, the Legion's flagship, to be very interesting. Overall by midway through the book the writing loses some of its flavor it had going for it in the first half and to a certain degree seems to just being going through the motions. It's okay read but definitely not one of the better Horus Heresy novels. I'd like to say I was hoping for more but knowing Swallow and his general depiction of Blood Angels I'll just finish by saying I'm glad it wasn't a total disaster as is so often the case.
Posted by Terminus Est at 9:09:00 PM