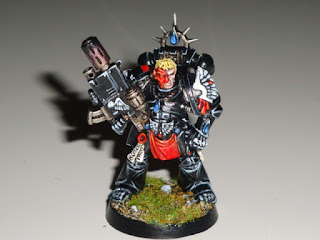 This past weekend an interview I wrote about Gabe Dobkin and his award winning Death Company army at BeakyCon2 aired over on Bells of the Lost Souls. Here is a link to the interview...

An anonymous poster made a series of rude comments that Gabe did not paint either his Death Company army or his Cobra themed Imperial Guard army. The anonymous poster claimed that both armies are the work of Fred Reed, an award winning painter and former employee of Games Workshop, whom now resides in Florida.

I've known Gabe for a long time and these accusations did not ring true to me so I personally contacted Fred Reed to get to the bottom of this fiasco. Here is what Fred had to say in regards to whether or not he painted Gabe's Death Company army or Cobra themed Imperial Guard army:

Hi Steve
Gabe has also been a good friend of mine for 6+ years. We've been painting together since we met... have I helped him yes, have I taught him most of what he knows yes. As a result his techniques and results are very similiar to mine (not as good and it takes him much longer) but did I paint them for him... No. Anyone who doubts Gabe's ability should sit down with him and watch him work... they will see that he is a great painter and very capable.

Email ThisBlogThis!Share to TwitterShare to FacebookShare to Pinterest
Labels: BeakyCon2