Battle in the Eye of Terror Special Mission 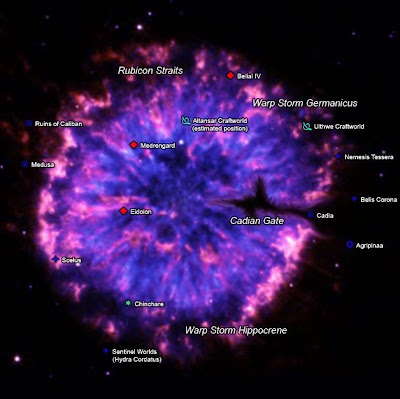 BATTLE IN THE EYE OF TERROR

Hi everyone - your ever friendly neighborhood Blow Fly here again to brighten your lives !! This week I have a special mission I designed to play with my friends who also have Chaos armies.


NOTE - Only Chaos armies can play this mission... and that means no human or xenos allies too. 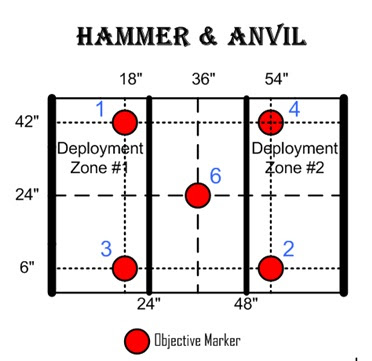 The battle takes place on a pristine maiden world located in the very center of the Eye of Terror… The power of the warp is incredibly strong here – daemons and the followers of Chaos are enhanced as follows:


·       No psychic tests are required and daemons can deploy as normal


·       All Chaos HQ choices with three or more wounds have Eternal Warrior, all other HQ choices gain +1W

Each odd turn has Night Fight.

Beginning on the second turn roll 1d6. An objective marker appears on the spot indicated in the figure above. If you roll a 5 then roll again. The objective marker then remains in play for two turns – if a scoring unit moves into base contact with an objective marker they gain control and are immediately granted a powerful Chaos boon – roll 1d6 and refer to the table below:

]  Only one unit can ever gain a boon from any one objective marker; however one unit can gain multiple boons.

]  If no scoring unit can reach the objective marker within two turns after it arrives then the marker returns to the warp – place the large blast over the center of the marker… It scatters 4d6 and leaves behind a S10 AP1 blast (Ordnance, Melta, Shred) before departing. If you roll a HIT use the small arrow to determine the scatter direction.

]  Note that one new objective marker appears at the beginning of each turn after the first. No more appear after the fifth turn.

]  The power of the warp is fickle as well… At the beginning of the 6th turn any boons granted from the table above are immediately lost.

Bound Icon      You can bind a daemonic troop choice to the icon. The daemons come in from reserve off the icon starting on turn 2 (roll for normal reserves). The bound daemons can assault the turn they arrive. You can sacrifice one member of the icon bearer's unit each turn to hold back the daemons.
50 points
Icon of Darkness
The icon creates a void of darkness the turn it's revealed during the movement phase. All friendly units within 12" + 2d6 of the icon are shrouded and terrain counts as both difficult and dangerous to enemy units. The icon bearer's unit also have Night Vision. This lasts until the start of the owning player's next turn. You can sacrifice one member of the icon bearer's unit each following turn to attempt to prolong the darkness... The icon will continue to function on a roll of 4+ on 1d6.
75 points
Warp Icon
The icon fills its bearer and his unit with raw warp power. The icon can be activated at the start of the assault phase. All members of the icon bearer's unit gain the Daemonic rule and +1S. At the start the owning player's following turns roll 1d6... On a roll of 3+ the icon continues to function. On a roll of 6 a random model in the unit is consumed by the warp.
150 points
If a unit with an icon is destroyed in melee by an enemy Chaos Space Marine unit before it is activated then that unit takes possession of the icon... On a roll of 1 on 1d6 every model in the enemy unit suffers a S5 AP- hit and the icon returns to the warp.

Email ThisBlogThis!Share to TwitterShare to FacebookShare to Pinterest
Labels: Battle in the Eye of Terror Mission