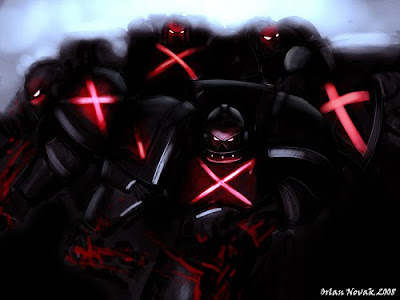 The last game was versus a somewhat interesting Dark Angels army:


5x Deathwing terminator:
(same as above)
5x Deathwing terminator:
(same as above)
5x tactical Marine/flamer
5x tactical Marine/flamer
Landraider/extra armor
landraider Crusader/extra armor
Deployment was Dawn of War (no Night Fight this round) and you could deploy all your HQ and troop choices if you wished. Again I won the roll for deployment and chose to go second, holding my entire army in reserve. My opponent also decided to start with his whole army in reserve, deepstriking all the terminator squads. There were five objectives. At the top of the 3rd turn each player deepstrikes one objective each with 2d6" scatter, two more at the top of the 4th turn, then one more at the center of the table at the top of the 5th turn. The first four objectives could be placed anywhere and could not scatter off the table. As the game progressed I knew my opponent would be playing for a draw so I did not worry about having to contest any of the objectives.
1st turn both landraiders move onto the table, each with a tactical squad inside, and pop smoke.
2nd turn in comes one squad of terminators and they deepstrike close to my long table edge.
My turn in comes Astorath and his crew along with Chaplain Urides and his Death Company. The Stormraven moves on 6" and the DC dread disembarks. Chaplain Urides fires his melta pistol into the landraider and pen 6s it, three of the tactical Marines die in the ensuing explosion. The good Chaplain and his crew would die over the course of the game to gunfire from the vindictive Crusader and Deathwing terminators. Quickly taking out the landraider with one shot was very helpful. My Stormraven then fired everything except the multi-melta into the Crusader and managed to break off the assault cannon. The DC dread charged and eats the squad of Deathwing terminators.
3rd turn in comes one more squad of Deathwing terminators and this time they deepstrike over on their side of the table. Hee! He placed his objective close to his Crusader.
My turn in comes Lemartes along with his crew. I embark the first DC dread back onto the first Stormraven then move in such manner that I can take maximum shots on the Crusader, ripping off the multi-melta and one sponson. My birds were pretty much safe now and I knew the coming 4th turn would be very brutal indeed. Note that I placed my first objective on my long table edge so that my opponent would have to worry about mishapping if he tried to land a squad of terminators close by.
4th turn in came the other two squads of Deathwing including Belial and his standard bearer. One squad landed behind the Crusader while the other landed in a position to support the second squad.The assault cannons fired on the closest Stormraven but did no damage.

My turn the two Stormravens moved in with everyone disembarking. I was able to move all my units into charge range of all enemy units... those fleeting dreadnaughts are pure gold ! Astorath gave the command to charge... epic blood bath... all that was left was the tactical squad that bailed out of the wrecked Crusader. My opponent then conceded the game.