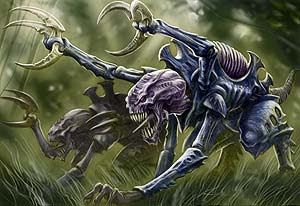 Introduction
I'm going to provide a series of articles on individual unit analysis for Tyranids. I am only going to cover the units I use as I have no in depth experience with others. Note that I use a pure reserve army - that is no unit starts on the table deployed prior to the first turn. I'll cover how and why I bring each type of unit onto the table in each of these articles.


Reserving your Entire Army
The beauty of a pure reserve army for Tyranids is threefold:

1) Foremost you can eliminate the restrictions of normal deployment. I have played many games versus Tyranids over the years with shooty armies... Typically only a few battered Tyranid units would get close enough to my battle line to inflict any serious damage and I had dedicated melee units waiting and ready to counter assault. Cover saves were much harder to come by prior to 5th edition so dedicated shooting versus Tyranids was very effective and they would often suffer massive losses while crossing open ground during the first two turns.

Outflanking, deep striking and mycetic spores are the three main methods to hold your Tyranid units in reserve. Genestealers have the option to infiltrate as well as outflank - I've found outflanking to often be much more effective. It's important to place some of the objective markers close to both short table edges so that if a brood of genestealers arrive on the wrong side while outflanking they can still control an objective marker - genestealers are a scoring unit so take advantage !

So basically you're running a three pronged attack with your genestealers - the regular genestealer broods attack along either flank while the Yrmgal genestealers push towards the center. As such it's hard for opponent to completely deny them a charge when they do arrive.

Waves
Prior to 5th edition one of the main tactics was to run your Tyranid army in waves. The first wave was composed of fast cheap units such as gargoyles and Ravenors - Their main purpose was to tarpit the opponent and quickly eliminate the threat of enemy shooting - note that mechanized armies could ignore the first wave for the most part but back then metal bawks were often burning death traps; that is, you didn't see a lot of effective mechanized armies in 4th edition... Many armies were comprised mostly of infantry.

The second wave was also composed of more fast hard units such as winged Hive Tyrants to come and destroy enemy units or cripple them to the extent that they were no longer a real threat.

The third and final wave was composed of units such as genestealers and Carnifexen to finish off the enemy. 4th edition Tyranid lists were dominated byba large amount of Carnifexen - up to six T6 4W units that could lay down a withering amount of midrange firepower. Carnifexen taken as heavy support had access to a 2+ armor save so they were fairly immune to missile launchers. That's all changed now and Tyranids in 5th edition have been designed to be fielded as a horde which is true to their fluff. It is what it is.

2) Holding your entire army in reserve cuts down on the amount of damage your opponent can inflict via shooting during the first part of the game - at least two turns if you happen to go second. It's quite helpful and a much better approach rather than using waves.

3) Third is the psychological advantage you can gain... Your opponent doesn't know where you'll arrive and this can force them to possibly make some big mistakes during their initial deployment. Psychology is very important for any game. You want your spirits to be up but you also don't want to be overconfident as well.


Genestealers
Genestealers have always been a top unit and in both 4th and 5th editions they are a troop choice. At first I thought genestealers should be your only troop choice for 5th edition but I've learned that gaunts are really good too if you've got enough synapse to spread around the battlefield. I field two units of 10 genestealers (both with a Broodlord) and one brood of 10 Yrmgal genestealers. My two troop choices have scything talons and toxin sacs. Scything talons lets you reroll ones to hit and toxin sacs let you reroll wounds versus enemy units that are T4 or less. Basically the philosophy here is to generate as many rending wounds|armor penetrations as possible. Genestealers can fleet, are I6|WS6 and don't have to take tests for instinctive behavior. They can also either infiltrate or outflank as I mentioned in the beginning of this article. Genestealers are a true workhorse and win games. They are also T4 which is pretty darn good for any non power armor army. They are your vanguard (i.e., first wave). Genestealers can roll right through most any enemy unit in melee except for landraiders and Monoliths.

So I've got 30 models that are total hard asses. Most Space Marine armies will be hard pressed to put that number of elite bodies on the table. On top of that I've also got close to the same number of gaunts. There is no Space Marine army that can field as many models and perform as well in my opinion.

Broodlords
The Broodlord functions like a Space Marine sergeant - it is a squad character that cannot be picked out in melee. The Broodlord is the equivalent of an HQ with three wounds, S5, T5, I7 and more base attacks than the basic genestealer plus they are cheap for what you get points wise. The Broodlord can eat a wound from a missile launcher or lascannon and keep on ticking... As such they can soak a couple wounds just like Draigo does. Broodlords also have a built in psychic power Aura of Despair that lowers enemy leadership by -1. Couple this with the Tyranid psychic power Shadows in the Warp and you can mess with Grey Knights - believe me when I say they don't like that either way you serve it up to them. Every time you block any Grey Knight psychic power is a great thing for Tyranids. For example if you hose up their psychic power Sanctuary a full squad of genestealers assaulting a squad of Paladins will really hurt them... At worse you are striking simultaneously in melee versus halberds and all those rending attacks bypass their 2+ terminator armor save. Strip off each Paladin's first wound and they are no better than a Grey Knight terminator in melee versus genestealers. If you must engage Paladins in melee it's all about taking them down one notch at a time.


Yrmgal Genestealers
Like I said I take one squad of ten. They are immune to the Grey Knight psychic power Warp Quake and can arrive from reserve right in the middle of the table. Yrmgal genestealers have the ability to morph +1 attack, +1S or +1T each turn. Basically the way it plays out is you first morph +1A followed by +1S then keep repeating ad nauseum. +1T is not that great compared to the other two morphs... It is what it is. Yrmgal genestealers also have a 4+ armor save so they have some decent protection from bolters other than being a basic T4. They are an elite choice. Tyranids have unfortunately lots and lots of great elite choices - the only two I take are the Yrmgals and Zoanthropes.


Conclusions
So I have told you a bit about how I play my army and what are the most inherent strengths of genestealers in general. Tyranids are now truly intended to be played as a horde army which is true to their background. Genestealers work very well in a full reserve army since they can outflank.
Posted by Terminus Est at 10:29:00 PM