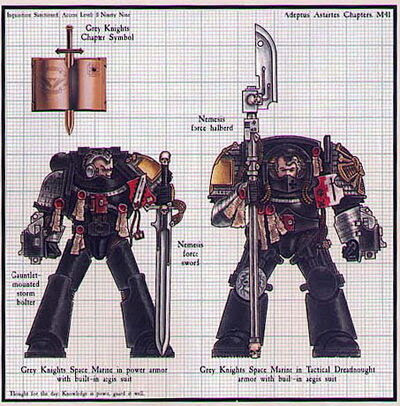 Introduction
This article is an overview to a series I'll write about how to play Draigowing as primarily a walking gun line army. Draigowing is very powerful in melee but in my opinion their main strength is derived from heavy saturation in terms of their midranged firepower. My style of play I have developed revolves around shooting in the beginning through mid game then a strong finish with melee during the end game to win.

My style of play and army design has some inherent weaknesses versus highly mobile shooty armies such as mechanized dark eldar. Dark eldar can spam S8 AP2 shooting which is a bane to terminators. I am working on concepts to resolve this dilemma and will delve into this subject in a later article in the series.

These two characters form the backbone of the army. They are both essential. Draigo is a beast (T5-4W-3++-Eternal Warrior) and can easily suck up a lot of punishment while the Librarian on the other hand is quite fragile in comparison. Often you will need to maintain a high level of focus throughout some games to keep the Librarian alive - your main psyker should always be well protected. The Librarian enhances your army with the psychic powers Hammerhand, Might of Titan, Sanctuary and the Shrouding. Most often I join the two together as they are quite a formidable duo. I also usually attach them to a squad of five Paladins. The Librarian's Warp Rift and Draigo's S5 psychic template come in handy versus hordes if they manage to close the gap to your battle line.

Here is I typically split them into combat squads:

Draigo and the Librarian attach to the second squad and form my most elite melee unit - they primarily act as your HQ bodyguard. The Librarian casts Hammerhand and Might of Titans or Quicksilver if necessary - Quicksilver is utilized versus high initiative enemy assault units such as dark eldar Wyches, Incubi, Tyranid genestealers or any enemy I5+ assault units. Often you'll be on the receiving end of an enemy charge so Quicksilver is not always a given. Remember to cast Quicksilver during your movement phase. You cast the other psychic powers at the beginning of the assault phase. Draigo and the Paladins both can activate their force weapons versus complex multi wound enemy units such a nob bikers or Thunderwolf cavalry. If you're fighting a unit of single wound models there's no need to activate any of the force weapons and remember the two independent characters must activate their force weapons independently from the unit to which they are attached - this is vital to remember. Grey Knights in general are a forgiving army but you don't want to make any needless mistakes with such a small army!

The first squad is primarily a firebase while as already stated the second squad acts as a retinue for your two HQ. I chose falchions because of the modeling opportunities plus it's helpful to have the extra WS5 attacks in melee. You can cast Quicksilver on the second squad with the Librarian if need be so halberds for them is not nearly as essential. The first squad is your most potent firebase with 16 shots from their four psycannons... They are simply devastating in the shooting phase. I chose three daemonhammers for the first squad so they can wreck IG parking lots in assault.

I keep them 10 strong as in a large group they can absorb more damage and dish out more pain in return as well. They are a strong firebase and also can put up a solid fight against just about any enemy unit. The large number of halberds means the bulk of the unit will strike first. Thawn is a level 2 psyker so he can both cast Hammerhand and activate his squad's force weapons. In many ways Justicar Thawn is basically serving as the addition of a third HQ in your army. I see him as a much better choice over the similary costed Apothecary for Paladins.

The Crusader is another vital unit and serves as the hub of the army - this ubiquitous tank has an assault ramp so you can move it up to 12" and launch an assault. Its armaments equate to a twin linked psycannon and six to 12 twin linked heavy bolter shots. I use mine to transport Draigo, the Librarian and the second Paladin combat squad. I highly recommend psybolt ammo as an option and it only costs 5 points as compared to 20 for the Paladins and terminators. The landraider Crusader also effectively extends the range of Sanctuary and the Shrouding when the Librarian is embarked inside since you then measure from the hull to determine the overall effective range for these two defensive psychic powers.

The Crusader roughly extends your charge arc by a factor of 1.667 times - I have been able to use the extended distance to reach Blood Angels jump infantry... It's always there for you if you keep the transport protected plus it will catch unwary opponents off guard. The Crusader offers the least amount of shooting when compared with the other units but it can cut off enemy LOS to the rest of your army - it is one of your main defenses. I tend not to move mine a lot so I can shoot more but I will use it aggressively when needed.


Initial Conclusions
I have shown you my most current 2000 point army list and provided some the basic strategies and tactics. The next article will delve heavily into the shooting phase which as I've said in my opinion is the primary strength of Draigowing. Draigowing is the strongest list when compared to the other two terminator-centric armies... That being Deathwing and Loganwing. Neither Deathwing or Loganwing can produce anywhere near the same level heavy volume of midranged firepower. You can have more models in your army with Deathwing but they are not as versatile plus their HQ choices don't stack up. Loganwing is a fun army and has solid choices for HQ with Logan and Arjac but overall I don't think this army can be played to the same level of competition as Draigowing.
Posted by Terminus Est at 10:16:00 PM