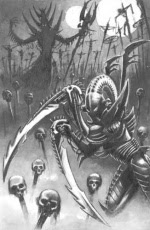 I have made a significant change to my 2000 point list incorporating Drazhar to help fight against Grey Knights. My record versus Grey Knights with my dark eldar has been poor - mostly due to my problems dealing with psyflemen. Grey Knight armies tend to be small in number so I wanted to add a hard edge to my army to help turn the tide. I have always wanted to use Drazhar as I love his rules and background. As you will know if you follow my blog I have been running Vect since day one. That's a lot of points tied up in two models. Is it worth it? To be honest I haven't played enough games yet to say yes or no but I was impressed with his performance this evening. Basically Drazhar gives you a close combat beast with Eternal Warrior... The fallen Phoenix Lord cannot be one shot off the table and can soak a couple of crucial wounds taking a bit of the heat off Vect if you play card your cards right.

I'm going to go through the combat sequences for Vect and Drazhar for my game this evening. I was running the pair with a squad of three Incubi (including a Klaivex with demi klaives riding in a venom (dual mounted splinter cannons).

- 2nd Turn -
Vect and his posse arrive from reserve and pull up beside a Grey Knight Strike squad. They disembark and proceed to wipe out the enemy unit in close combat then consolidate into hard cover.

- 3rd Turn -
Enemy shooting is only able to kill the two grunts and Drazhar suffers a wound. A Librarian and five man squad of Grey Knight terminators then charge the duo successfully casting Quicksilver. The Klaivex is butchered but Drazhar pulled through with one wound left... their high weapon skill is a good defense versus small elite units. Vect is untouched. They finish off the terminators and break the Librarian, catching him. The enemy psyker then suffers a wound due to No Retreat armor saves.

- 4th Turn -
No enemy units are able to reach the protracted combat and the evil duo manage to strip the last wound off the Librarian then consolidate back into cover again.

- 5th Turn -
They both are destroyed by enemy shooting.

I manage to lose the game by one objective during the 7th turn. If it had ended on the 6th turn I would have won by one objective. Lately it seems like all my games have played out the full number of turns, which I'm fine with... I can remember though a long stretch not too long ago when it seemed like all my games always ended on the 5th turn... So the odds have apparently evened out.

Did the squad get their points back? Yes they did. Vect took one wound failing his 2++ save which insta gibbed him... Otherwise he would have probably won the game as he was in an excellent position to kill the Grey Knight Grand Master who was down to his last wound.

Will I field Drazhar again? Definitely! Is Drazhar a good choice for most dark eldar armies? Definitely not. My previous version of my 2k list has a lot of bling which I trimmed off along with a Succubus to fit the Phoenix Lord into my army. Like I said it's too early to say whether or not I'll stick with him... He still has to pass the test of time. I was definitely impressed with what he brought to the table. Obviously the combination of Vect and Drazhar is very strong in melee plus having an Eternal Warrior to soak a couple wounds is a very nice touch. He is definitely a lot of fun to play and that is a big plus for me because that is a big part of why I like to play.
Posted by Terminus Est at 11:19:00 PM