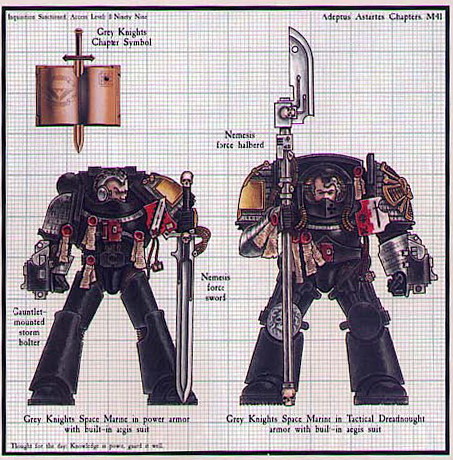 I was looking over my army list for WarGamesCon and flipping through the codex for last minute super tweaks... You know how it is - often you discover some of the best combos right before a big tournament.

I've always liked the psychic power The Summoning but felt it was much too risky... Basically the Librarian can pull back a squad or vehicle (if the vehicle is equipped with Warp Stablization Field - WSF) from anywhere on the table... The chosen unit then must be placed within 6" of the Librarian and counts as deep striking. This is very risky though due to the 2d6" scatter and I've been spoiled by only rolling 1d6" for my Blood Angels jump infantry squads. I took a closer look at the entry for the Librarian this afternoon and finally noticed he has the option for a teleport homer ! So for the cost of psybolt ammo on one squad of Paladins I can equip my Librarian with the Summoning psychic power and a teleport homer - to me that's an awesome combination and will open up the door to some new tactics for my Draigowing army.

Say for example you are playing a multi objective mission - Annilihation plus Capture and Control... Your Librarian is an anchor unit guarding the C&C objective while you send out the rest of your army to wreck havoc raking in the killpoints then towards the endgame you suck back a scoring unit or two to secure your C&C objective for the win. Of course you'd want a squad of Paladins or Grey Knight terminators to babysit the Librarian and that's where combat squads come into play with this tactic.

I've always been a big fan of using deep strike to avoid deployment restrictions and this helps small elite armies in my opinion - even more so for the case of an entire army relegated to foot slogging across the table. This tactic I feel is an ability that will catch many opponents off guard as people get so engrossed in the game that they'll never expect it. So yes it's kind of sneaky but it's legal so that's a good thing as far as I'm concerned. xD
Posted by Terminus Est at 6:12:00 PM