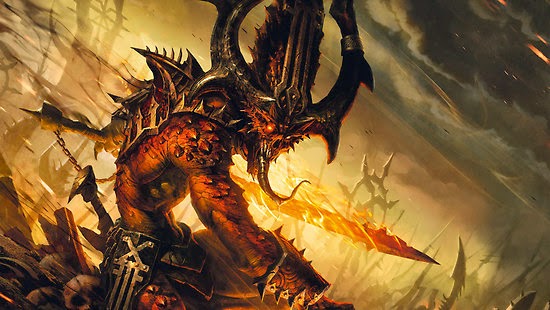 "I smell the foul ichor of tainted xenos." says Magnus. "Their blood and skulls are as good as any other." he grimaced as he gave the signal to charge. "Tear them limb from limb!" The Juggernaughts gnash their metal teeth in anticipation of the soon to come carnage.

1st Turn Khorne
Not much to do this turn and I forgot to bring in the dreadclaw assault pod. The two Lords and Herald attached to the Crusher squad amble into the ruin beside the Typhon for cover. Typhon and land raider pivot.

Shooting from the Typhon deletes the majority of one Hormagant brood, wounds the Carnifex and eradicates three more Hormagants from the other brood. The Typhon fires one lascannon into the Carnifex dropping another wound. The land raider then manages to drop one more wound. This game it happened quite a lot I would bring a monstrous creature down to its last wound but not be able to finish it off that turn.

1st Turn Tyranids
To my left immediately the cagey Flyrant that had been hiding behind a building takes to the air to draw a bead on my Crushers. The Alpha Warrior splits off from the small brood of Hormagants joining the larger brood and they surge forward supported by the Carnifex. The smaller brood of Hormagants drop back behind a small piece of terrain to hide from the Typhon. The Tyrannofex moves up to the side of the building drawing a bead on the land raider while the Zoies hold their position inside.

To my right the other swarm starts to move forward with the other brood of Zoies leading the way.

The Tyranids cast the FNP psychic power successfully over to my left juicing the Tyrant and wounded Carnifex. Warp blast is cast on my Crushers but is easily denied.

Shooting sees the Crushers only lose one model to the Tyrant's devourers thanks to cover from the ruin and the Tyrannofex rupture cannon bounces harmlessly off the land raider.

Nothing major this turn but things will start to liven up soon.

The Bloodletters also arrive deep striking into the same ruin housing the Crushers and they stick it. The Crushers move forward out of the ruin straight towards the Tyranid menace right next to the Alpha Warrior, Hormagants and wounded Carnifex. The land raider moves a bit to shield the Typhon from any incoming warp blast. The Typhon moves to the left so it can draw line of sight to one of the gaunts cowering behind cover.

The Bloodletters run inside the ruin to spread out expecting one of the Mawlocs to land on them then the shooting commences.

The Typhon drops ordnance on the poor gants vaporizing them back to the spore pools and a lascannon sponson puts an end to the Carnifex as well... two Blood Tithe points just like that.

The Crushers then charge the Alpha Warrior and gants with the Herald issuing a challenge to the Alpha Warrior. The Lord with Goredrinker swings first with the Axe of Khorne to ratchet up his kill count... The other Lord finishes off the rest of the gants for another Blood Tithe point. The gants are able to drag down another Crusher in their final death throes. Finally the Herald deals two wounds to the Alpha Warrior taking none in return, keeping them locked in combat.

2nd Turn Tyranids
Both Mawlocs come in from reserve. One lands clipping my Crushers but scatters off harmlessly. The other lands on top of the Bloodletters with minimal scatter but due to the spread and some hot invulnerable saves I only lose one daemon then the Mawloc goes back into reserve.

One of the Hormagant broods over to my right makes a move towards the Crushers hoping for a long charge while the Flyrant circles over the Bloodletters (still zooming). The Zoies to my right move into a ruin closing in towards my heavy armor.

Tyranid shooting then commences... He fires into the Bloodletters but I only lose two again due to cover from the ruin - amazing. The Tyrannofex then misses both shots with its rupture cannon.

The Herald dispatches the Alpha Warrior for another Blood Tithe point and takes a wound in return.