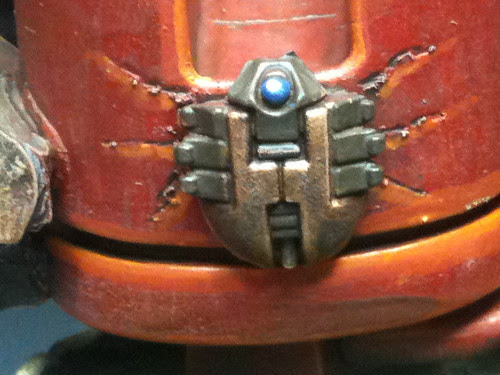 I had a great game versus Space Wolves this evening with two units that could veil... No Stormlord and no Pulseteks. ScArabs, Spyders and Wraiths seem to be pretty much Must Take units. Following some great advice from Greg Swanson I started with two packs of six ScArabs each and two units of three Spyders each... You generate so many ScArab bases over the course of the game you can end up with an army that is a lot more points than what you started with at the beginning of the game—it's really kind of crazy !! I had one pack of ScArabs that got up to over 15 bases and the other one was really large as well by the end of the game... If you do the math for this game I ended up with approximately 2.5 times as many ScArabs as I started with at the beginning of the game -  thats approximately 360 extra points... Kind of broken... Heh !

Once the SArabs hit enemy armor you'll either finish them off in the same combat or pop them the next turn with your tesla weapons. Scarabs penetrating rhinos on a 2+ in melee !! It's silly. Wraiths can also mow through enemy armor quickly as well.
Posted by Terminus Est at 12:26:00 AM