Hey everybody it's your friendly neighborhood Black Blow Fly swinging through your neck of the woods to spread some holiday cheer and mischief ! A lot of people say the dreadnaught is no longer competitive with all the xenos monstrous creatures that are so popular these days. The thought is that a dreadnaught can be one shotted which while true is something that can be mitigated. If you think about it dreadnaughts are about as close as you can get to a monstrous creature for Space Marines.

So let's take a look at the dreadnaught and see what is has to offer and what can make it competitive. It has its strengths and weaknesses like any other unit... The right build and possibly a transport can make them truly shine.

Strengths
If you play Space Marines you know the basic dreadnaught got a nice boost with four base attacks now - this was a great buff - first and foremost S10 AP2 is no joke, especially when striking at initiative. This is a natural counter to deathstars, Imperial Knights, other super heavies and monstrous creatures... Even the mighty gargantuan must take heed.

There are several variants that stand above the rest:

All of these chassis have a fundamental component in common: 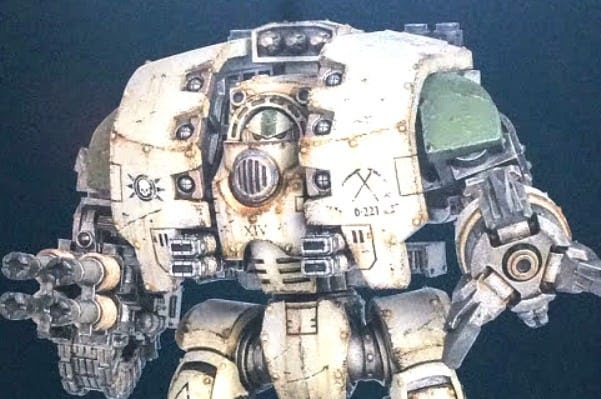 Both the Contemptor and Leviathan are from Forgeworld with lots of options for a high degree of customization... You pay for what you get. My standard Chaos Contemptor always has a heavy conversion beamer which can drop a S10 AP1 large blast - place it on the back line and in a corner if necessary to maximize range... It can easily earn back its points. I remember one sixth edition game versus Tau in which the Contemptor almost single handily beat a highly optimized army.

The Mortis pattern Contemptor with dual Kheres assault cannons is another monster - 12 BS5 shot at S6 that rend - plus it has free access to Skyfire as well.

The new Leviathan is truly a beast in close combat and can even take out gargantuan creatures... That's pretty amazing !!! It's siege claw can generate additional wounds in close combat which gives it the ability to go toe to toe with super big baddies such as even a Wraithknight. The Leviathan has the equivalent of assault grenades and strikes at initiative 5. It also has a 4++ invulnerable save and access to immunity to ranged melta weapons via Ceramite Plates. 4 hull points is also another big plus. This is the most survivable walker... Sure it's a lot of points but you get it all back in spades.

The best build for The Furioso is a frag cannon and heavy flamer - two S6 rending templates followed up with a heavy flamer template. This weaponry provides you direct access to ignoring cover saves... The drop pod for delivery is the way to go with this one.

There is another walker that should be mentioned - the Soul Grinder which also falls into this tier and has an invulnerable save as well. While it's technically not a dreadnaught it's basically the same thing with its own unique rules.

Finally there is the Maulerfiend which has become quite popular with the advent of Khorne Daemonkin. While extremely fast with a 12" move its armor 12 and like the Soul Grinder has WS3 which basically halves it's number of attacks in melee. They are good at what they do and fairly cheap for what you get but not my style.

Monstrous creatures tend to struggle versus armor 13 in melee since most are base S6... this means they must use Smash attack (S10) which is only one attack. I have seen a single dreadnaught hold up a host of dark eldar Talos for several turns while slowly whittling them down. To me this is a big deal if properly exploited.

Basically you have to decide if you want your dreadnaught geared for melee or shooting - some can do both quite well too. I tend to for the combination which makes them more versatile.

Weaknesses
As I mentioned earlier the biggest weakness is one shot can destroy any dreadnaught. The melta bomb is also really bad news which bypasses Ceramite Plates. They are also slow. The good news is these cons can be mitigated to a strong degree if yours willing to invest in the right transport which brings us to our next subject...

How to deliver the Dreadnaught

If you go big then you go strong. A basic drop pod is the bare minimum standard required to get them where you need them. My philosophy is in for a penny in for a pound... Lucius pattern drop pods, the Dreadclaw and Stormraven are your best options. The beauty of the latter two transports is they are both flyers and can deliver the dreadnaught directly into melee.

I often run two Mortis pattern Contemptors with the dual Kheres assault cannons, both riding in separate Dreadclaws, for my 30k Sons of Horus army. You can take them in a talon which means they both arrive the same turn. They seem to always do something spectacular.

He is not cheap but he has never failed to impress and has won many games for me. He actually does not require a transport due to range of his primary weapon.

A lot of people will tell you that the dreadnaught is not competitive but I have seen them do very well. It is an investment in points to get the most out of a dreadnaught and they are suited towards particular types of armies. The Forgeworld models are really awesome looking and fun to play... so check it out.
Posted by Terminus Est at 9:24:00 PM