The Role of the Stormraven for Grey Knights 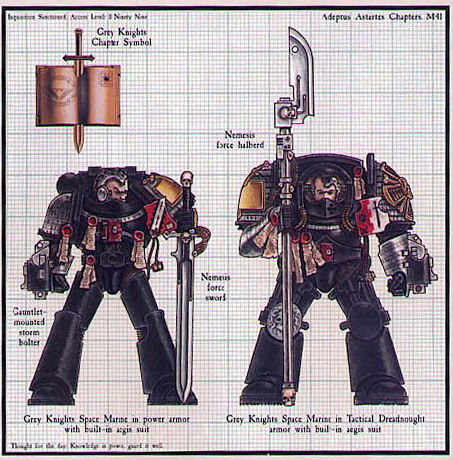 I've written quite a few article on using a Stormraven for Blood Angels DoA armies. Today I'll be playing my first game with Grey Knights versus dark eldar (1500 points - sorry no Stormraven) so this is just my observations based on prior experience. Note that this article focuses on the use for pure Grey Knight armies.

Introduction
The Stormraven plays a valuable role in a Blood Angels DoA army since it provides some long range AT plus it can transport jump infantry and assault dreadnaughts, delivering these units straight into melee. Grey Knights have access to long range AT mainly by way of psyflemen dreadnaughts. I see the Stormraven more useful as a fast transport for Grey Knight assault units than as a gunship. The beauty of the Stormraven as a fast transport for Grey Knight terminators and Paladins is the ability to assault quickly, inserting these units right where you need them. The twin linked multi-melta is a great choice since you can move flat out and fire the melta at an enemy tank using PotMS - this is a big bonus for Grey Knights since they do not have access to melta weapons in their squads. The Stormraven also offers some much needed protection for Paladins. Finally the Stormraven costs less than a landraider, which helps in a pure Grey Knight list as everything is expensive points wise.

Survivability of the Stormraven
The Grey Knight Stormraven has all the same protection as the Blood Angels version - which I covered in detail here:


There are two additional benefits as well:

These two added benefits require passing psychic tests and it's important to keep that in mind. It's not a problem versus some armies but there are a good number of armies that have strong psychic defense. There is also always the chance that you'll fail a psychic test at the worst possible moment. As such I see extra armor as a necessary option.

If you have to go second versus a shooty army it's usually best to hold your Stormraven in reserve unless there is some high cover you can safely hide it behind during your deployment. Unfortunately I don't think Psychic Communion works until the character with this power has been deployed - otherwise it would be nice to field a Grand Master with a Librarian and up to four Paladins embarked in a Stormraven then use Psychic Communion to help bring them in sooner. Having to hold the Stormraven in reserve is something to think about as you'll have a small army and will often need your heavy hitters early in the game. Maybe when GW releases the official FAQ for Grey Knights you'll be able to use Psychic Communion while the character with this power is still held in reserve. We will just have to wait and see.

Mine Strike Missiles
If the small blast marker touches an enemy psyker then they automatically suffer from Perils of the Warp. As such Mine Strike missiles offer an excellent counter to enemy psykers - they are S4 and count as defensive weapons - so you can move up to 12" and fire most if not all of your weapon systems! I see them as being very effective versus CSM daemon princes and certain Tyranid monstrous creatures (e.g., Tyrants and Tervigons).  This ability will force other armies to keep their psykers (such as Librarians) out of harm's way. Mine Strike missiles have 72" range so by proper positioning you can easily outrange your opponent's army.

Conclusion
So there you have it. Players who want to mech up their terminators and Paladins will have to decide whether to bring landraiders or Stormravens for each unit. The landraider probably has better overall protection with AV14 all around but it is slower and costs more points.
Posted by Terminus Est at 11:00:00 AM