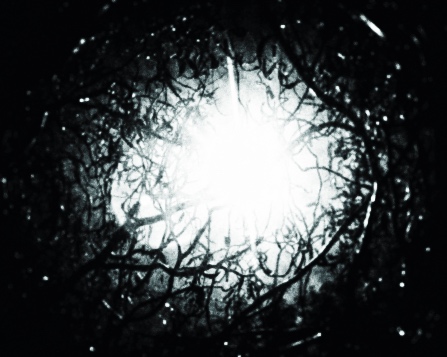 Paragon slid against the wall and activated his camofield. His eyes were two points of jet black staring into the void ahead. McGregor knelt down taking the last melta bomb and set the timer to a short count then he hurled it around the bend. There came the flash from the explosion and bright light filled the hallway. They heard hard steps clanking against Wraithbone. A tall silhouette appeared framed by the burning air. The gigantic figure carried a spear which it held out menacingly stabbing into the dark ether. McGregor broke into a charge firing his combi weapon at point blank range. The Avatar smashed a closed fist into the Huscarl knocking him into the wall. "Attack!" shouted the last Templar as he righted himself and struck back with his power fist.

The assassin slipped past the tussle unseen entering the final parameter. There before him lay the Infinity Circuit unguarded. "Who approaches?" came a voice of alien tongue. Paragon ignored the question as he approached the waiting console. Quickly he slipped his finger tips into the runic panel. "Shea nudh Asuryanish ereintha Asuryanat!" came the unseen voice again. "May the blessings of Asuryan protect the children of Asuryan from abomination." said Paragon mentally translating the alien phrase. His black body glove shimmered as the nanobytes broke free streaming down his arms racing into the tiny hidden apertures. The panel began to trimmer as the nanobytes sluiced into the circuit. Paragon felt sudden elation as he stood over the circuit bare now that the glove had taken its true form. A symbiotic link grabbed at his mind filling his ears with the tortured screams of thousand souls consumed by the man made virus... soon it would be millions.

Long black tentacles erupted from the mainframe grasping him by the arms. They quickly slid around his forearms cruelly twisting about as the alien suckers bit at his exposed bare flesh. It burned like fire, the pain was intense. He could feel the tentacles drawing him into the living circuit. His bones began to crack from the extreme force exerted upon his arms. Slowly more tentacles unfolded from the mainframe reaching down to grasp at his legs. Paragon went rigid driving the pain from his mind as he continued to listen to the many screams and hopeless wailing emanating from the Infinity Circuit. Some of the voices cried out begging for mercy as they were consumed. "Nil ann ach cleasai, agus tá an iomad measa aige air féin." he said to no one in particular. "It is done now." He could not help but laugh as he continued to listen until there was nothing but utter silence.

His left hand broke free clutching the long hilt of a hidden dagger girded to his chest. Quickly he cut across the thick ropey tentacles grasping his other arm. Poisonous black ichor spilled from the deep wounds filling the air with a putrid toxic miasma. More tentacles erupted from the circuit lashing out at his face. Again he drove the dagger down hard sawing at its monstrous clinging grasp.

The nanobytes returned rushing back out again sated from their immediate task. Slipping through the tight grip of the many tentacles the nanobytes reattached to his body bringing renewed vigor. Paragon felt the energy seeping back into his body as he tore away the last of the long slimy boneless limbs. The mainframe collapsed falling apart in a steaming wreck.
Posted by Terminus Est at 12:40:00 AM