Holiday Grudge Match No. 2 • Plaguewing vs. The Big 6 (concluded) 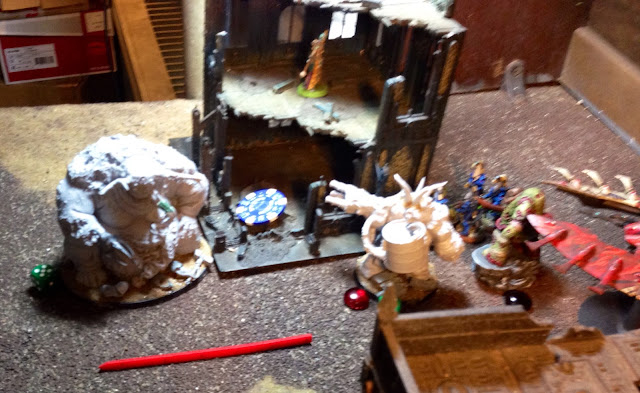 Recapping at the top of turn 5 (eldar):

Eldar—5th Turn
The Autarch (Warlord) and his Dire Avengers disembark beside the Nurglings ready to torrent them along with some of the other close by eldar units. The other five man squad of Wraithguard in the Wave Serpent disembark and jump on the objective marker in my deployment zone... Remember that two Wave Serpents are shrewdly placed between them and my Plague Marines blocking them from my objective marker. Eldar shooting predictably finishes off the rest of my Plaguebearers but my Plague Marines pass all their saves. A lot of eldar shooting is focus fired into the Nurglings but amazingly (mostly due to their awesome cover save) I only lose one base and another drops one wound. Some shooting targets my CSM Prince... He has Iron Arm up and is in cover as well, suffering no wounds. The Autarch and his retinue of Dire Avengers assault the Nurglings... Drawn combat. Super Fatty and Real Fat dispatch the last of the four Wraithlords, consolidating in cover to my right. 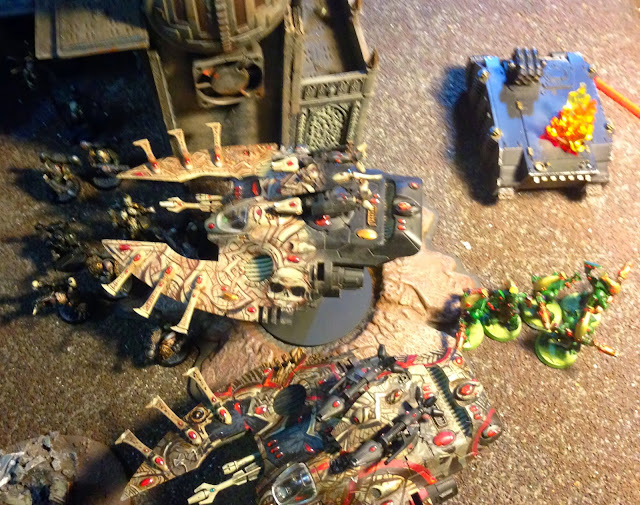 Plaguewing - 5th Turn
Big Fatty glides over towards the two remaining Wraithguard holding an objective marker in their deployment zones. Super Fatty slowly waddles over while Real Fat glides over to assault the Spiritseer. I string out one squad of Plague Marines so they are holding the central objective marker with the meltaguns up front to target a blocking Wave Serpent. Shooting sees the empty blocking Wave Serpent wrecked... The Plague Marines are not in range to deny the objective marker held by the Wraithguard in my deployment zone. Nurglings again draw combat with the Autarch and Dire Avengers. Big Fatty assaults the two Wraithguard and snuffs them. Real Fat then has his daemonic way with the Spiritseer and snuffs her too... Heh ! 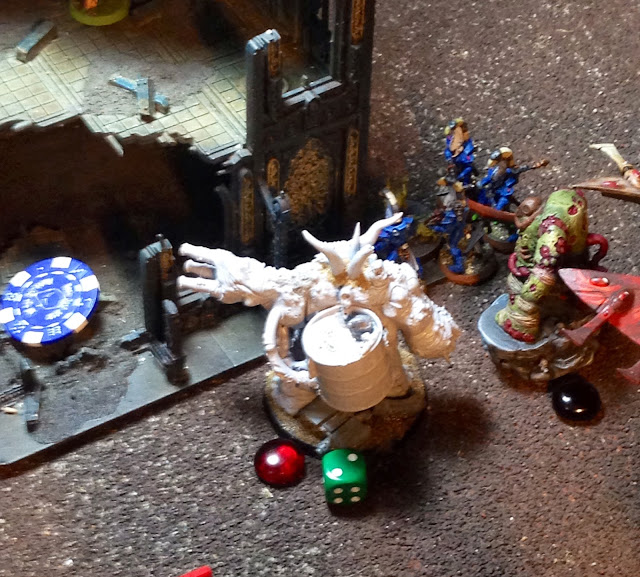 Where the Game Currently Stands
I have Line Breaker and control the central objective marker. My opponent has First Blood and Line Breaker plus he controls the objective marker in my deployment zone as well... 3-2 in favor of the eldar—if the game ends it'll be a minor victory for the eldar and I'll never hear the end of it... Papa Nurgle PLEEEEASE help us !!

My opponent's significant other rolls the dice to see if the game will continue and up pops a 4 !! Oh yeah baby, it ain't over yet and Nurgle got something to say about it too.

Eldar—6th Turn
The Wave Serpent transporting Dire Avengers shuffles over a bit to block off my Plague Marines and the remaining squad of Wraithguard back up a bit to avoid any possible charge from my Plague Marines. My opponent still has two Wraithlords left but he opts not to move them towards my trio of big fat daemons. Shooting only manages to drop a couple Plague Marines and Real Fat suffers two wounds. Again the assault between the Nurglings and Dire Avengers is a slap fest... I am down to one base with two wounds.

Plaguewing—6th Turn
My big daemons are free to roam once again. I send over both Princes to make sure I finish off the Autarch (Warlord) and Dire Avengers locked in combat with my Nurglings. Super Fatty moves towards the fist fight but is too far away to make a charge. My Plague Marines are still blocked off from denying the objective marker in my deployment zone... In a surprise move I move them up into rapid fire range of the Wraithguard, making sure that a couple are still strung back to hold the central objective marker—I've got a rhino blocking LoS to them as well. The Plague Marines fire into the Wraithguard cutting down three of them—they might no longer hold the objective marker in my deployment zone now. The two Princes then come to the aid of the last Nurgling, snuffing the Autarch for Slay the Warlord along with the last of those Dire Avengers. 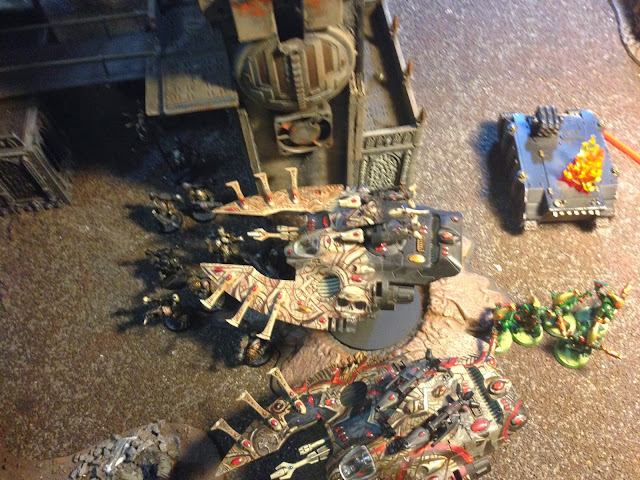 My opponent then rolls to see if there will be a seventh final turn and up pops a 6 ! Heh heh... Betrayed by his own dice.


Eldar—7th Turn
The Dire Avengers hop out from the rear of their blocking Wave Serpent to bolster the Wraithguard. Shooting then ensues and the eldar cut down a couple more Plague Marines. Real Phat is brought down to his final wound and that's it for the eldar.

Plaguewing—7th Turn
Big Fatty swoops over to contest the objective marker held by the Wraithgusrd and Dire Avengers. We call it there as I'm now up by one and it's the final turn. 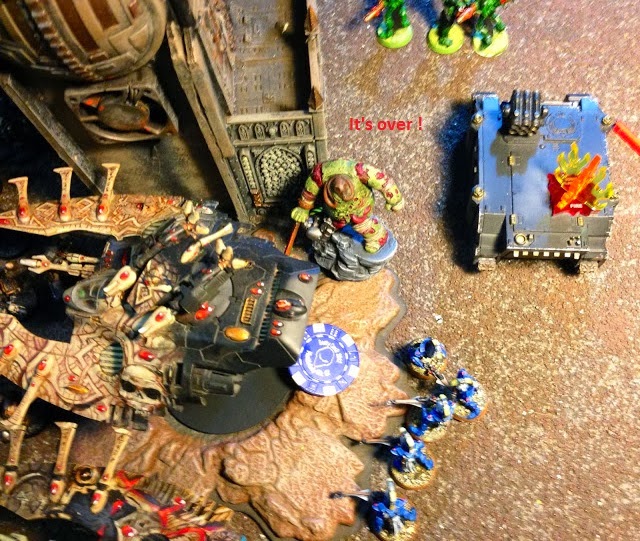 Post Game Analysis
Having the initiative seized on me seemed tragic at first and denied me the opportunity to move up my rhinos to control the midfield. I lost one rhino as a result and gave up First Blood... However this gave me the second turn which I think in turn eventually lead to the win. Night Fight was in effect the first turn and two rhinos were strategically positioned—as such they were both unharmed during the first turn eldar alpha strike. This was crucial for holding the central objective marker, which as it turned out was the only one realistically within my reach due to how the game played out. If it had been me, I'd have been a lot more aggressive with the remaining two Wraithlords... Maybe they could have made something happen rather than playing it safe, only ever firing their ranged weapons.

It was a very close game through the sixth turn and I would have lost had it only gone five turns. I bid my time and made it count when I could get my licks in. The fairly late arrival of Super Fatty coming in from reserve delayed my game plan but fortunately the game went seven turns so it didn't matter in the end. Sometimes you've got to take some risks and hope they pay off. The eldar had excellent mobility and serious fire power so I had to be cautious the first half of the game. Everything came together towards the end as planned and it was an extremely enjoyable game.
Posted by Terminus Est at 12:00:00 PM