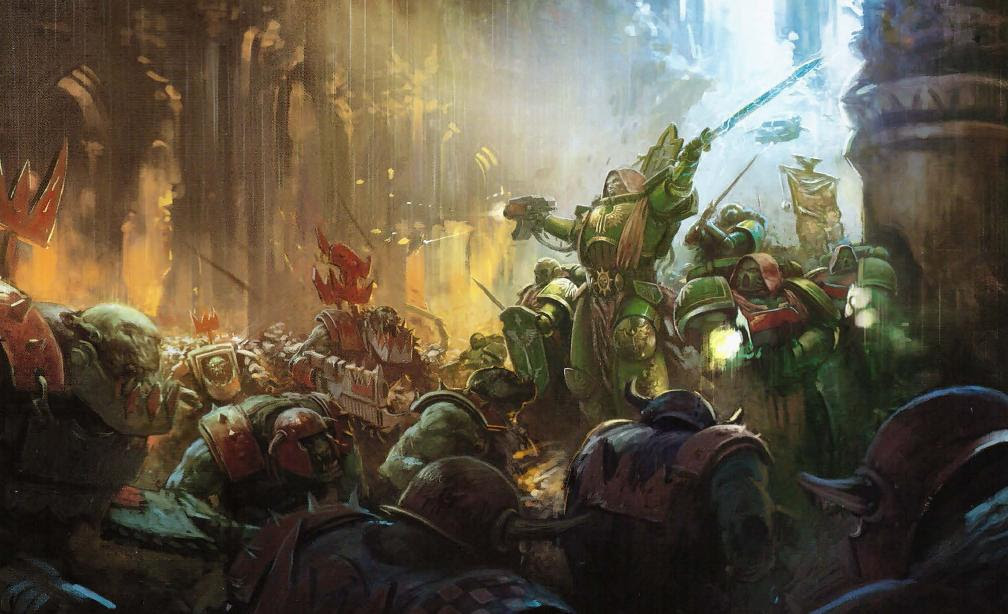 Today we have a guest batrep from a friend I play often in my local area. There is some commentary.  ;  )

Here are the 2000 point army lists to the best of my memory:

I have played twice before against this army with my old Storm Crowe list and lost both times. My opponent's army has lots and lots of long range firepower with the Lootaz and Dakkajets plus often he can teleport a huge mob of Shoota Boyz using an attached Weird Boy for even more shooty! I consider this to be one of the more competitive armies in my area. I redesigned my army list to be more balanced... I had this particular Ork army in mind but I didn't specifically redesign my list solely to counter this one.

Here is my list to the best of my memory I was running for this game:

I have found this particular mission often comes down to First Blood with each player trading shots across the table the entire game.

Opponent's Pre Game Thoughts
So I pulled out my Orks with my 'Feed my opponent First Blood Dark Angels drop pod' army out for the first time.  Of course Mork would force me to play 'Emperors Will' as a curse for using filthy pink humies in power armor for my allies.  Also a bonus curse for playing Steve too! He excels at playing this mission if there is a piece of blocking terrain on the table.

1st Turn - Orks/Dark Angels
I drifted with my drop pod away from him and had to hide the First Blood unit in some ruins because I was out of range.

NOTE
I was kind enough to remind my opponent about Coteaz' We've Been Expecting You special rule before he decided where to place his drop pod.

The Orks failed to take out the Strike squad in shooting. Steve assaulted and it took him four more turns to get Slay the Warlord from my Big Mek with KFF.

Rest of the Game
My Dakka Jets came in piecemeal which sucked big time.

Opponent's Post Game Thoughts
I failed to set up my Aegis Defense line up on the 24" line on the edge of my deployment line so Steve had 12" of 'Free Parking' in his deployment zone that I could not shoot with my Lootaz. The comms relay is getting added to the list instead of the quad gun.

NOTE
I didn't know Lootaz can't move or run. Must suck to be a Loota these days.

The deployment of my Wall and Lootaz - I knew Steve would hold most of his stuff in reserve and they would be safe.  Also making sure he brought in all his reserves on the turn he rolled them. He "forgot" to bring everything on the table.

NOTE
This was the first time I played this list. All my units in reserve were over on a bench on the far side of the table from me. I forgot to place my Anni Barges the turn they both arrived. It was an honest mistake... I forgot about them since I hadn't used them in a long time. The Anni Barges really helped me shoot down all four dakkajets and the S6 guns can't touch my AV13... Didn't really alter the final outcome in my opinion - I would have shot down more dakkajets faster is all.

At the end he won with Slay the Warlord and First Blood. We both had an objective that was in our deployment zones.

NOTE
Like I said I lost to this army twice before and it has been tweaked to score First Blood versus my land raider Crusader via the melta pod. So after doing some serious thinking I decided to completely overhaul my army list to make it more competitive. I tend to play the same list rather than tailoring it for each army I play against. There was nothing preventing the Lootaz from moving and running to get into range of my army. I did have one decent size piece of terrain that blocked LoS and used that to my advantage... Why shouldn't I? This particular mission favored my army. If the table had been turned I would have played the Orks more aggressively moving and running forward each turn.
Posted by Terminus Est at 3:08:00 PM