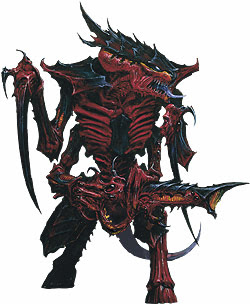 Introduction
This article covers two units that don't seem to get much attention - Tyranid Warriors and termagants. Used together they can provide a powerful synergy. You have a small synaptic scoring unit that can shepherd another large horde like scoring unit. Together they can control objectives and are hard to remove if stuck in cover. I like this combination better than using a Tervigon as both these units function better when mounted in mycetic spores. If you have been following this series of articles you'll know that I play a fully reserved Tyranid army.

Warrior Brood
Tyranid Warriors don't seem to get much love these days but still they are a troop choice and provide synapse - both of which are very important for any Tyranid army. I typically use mine as a midfield anchor in my synaptic network and they don't see much action on the front lines as most often they shepherd other troops such as my termagants. Mine are armed with deathspitters and a barbed strangler so sometimes they have an opportunity to shoot. Recently I have been using them for melee action and truth be told I have found them to be solid. Their main weakness is T4 - power fists make them quickly disappear. Still though if you arm them with bone swords (count as power weapons) and adrenal glands they can hit hard. Warriors have three base attacks and are WS5 so on the charge they generate a large number of attacks. I run a brood of three Warriors mounted in a mycetic spore. Mine are also equipped with lash whips which I consider to be a good defense versus the Grey Knight psychic power Sanctuary. You don't have to worry about losing the brood to a bad roll for dangerous terrain since Warriors are a multi wound unit. They are very good at eliminating many MEQ units such as Strike squads, Grey Hunters and even Death Company - the trick of course is to make sure they charge which shouldn't be too hard to do if you use other units to screen them. They are deadly versus an IG blob since they can kill large numbers of guardsmen each round of melee and can absorb wounds from the enemy power weapons.

Here is how I kit my unit:

They cost around 200 points when mounted in a mycetic spore and I think they are a real bargain. If you throw them in harm's way they will probably die eventually so make sure it's worth the risk of committing them to an assault. They can hold an objective and provide synaspse so often it's better just to use them as another node in your synaptic network. My unit is fairly cheap for what you get and they are extremely versatile. You don't hear much about them but I think they are a great unit and can work in most any Tyranid army.


Termagants
I run a brood of 20 termagants armed with devourers and mount them in a mycetic spore. That equates to 60 S4 shots the turn they land. As such they are an excellent deterrent to enemy infantry units. Versus a T4 unit they should inflict 15 wounds which equates to five dead Marines. It might not sound like much but if you can target a squad of Long Fangs they'll make their points back quickly. Obviously they will mulch a squad of dark eldar Warriors. The devourers cause -1 leadership if the targeted unit suffers a wound which can help versus Grey Knights, especially if you stack this with other leadership reductions such as the Broodlord psychic power Aura of Despair - it works well with Shadows in the Warp too. This particular build is often referred to as devilgants.

It's a large horde like scoring unit that can hold multiple objectives. They don't necessarily have to fire their bio weapons to help you win a game. Stick them in cover on top of an objective with a synaptic unit closeby and your opponent will have their work cut out to eliminate them. Sometimes I drop them right on my opp0nent's front porch with no synaptic support. If they fall back I'll have a synaptic unit positioned behind to halt them.

They are another relatively cheap unit that can fulfill multiple roles. One of the main strengths of Tyranids is you have access to lots of cheap scoring units which is powerful in fifth edition.
Posted by Terminus Est at 8:56:00 PM