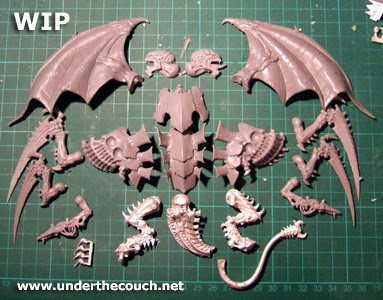 I have made a few changes to my existing list. These changes are based upon good feedback over on BoLS. This past weekend I played a game versus Space Wolves with my prior list and pretty much got tabled (first time). The Space Wolf army has two Wolf Lords on Thunderwolf mounts, two squads of Thunderwolves, two squads of Grey Hunters (one mounted in a rhino & one mounted in a drop pod), two squads of Long Fangs, a Lone Wolf and Rune Priest... Only two scoring units but still pretty darn tight.

The major change to the list was dropping one Trygon Prime in exchange for a Flyrant with twin linked devourers (brain leech ammo), bone sword & lash whip plus Hive Commander. I had to shave a few points elsewhere in the list so I could take the option for Hive Commander and it worked out okay. I am used to playing games where the majority of my army arrives during the third turn when using two Trygons.

Tonight I had a rematch versus the same Space Wolf army (my buddy Mat) debuting the new Tyranid list and won by a fairly solid margin. The +1 for reserves due to Hive Commander was huge so I think I'll be sticking with this new list and test it out more. I just happen to have the Forge World Hive Tyrant with wings laying around plus some sprues with devourers arms for Tyranid monstrous creatures so I should have the model assembled and ready to go by the end of the year.

One Trygon teamed up with the Flyrant was much more effective versus two Trygons in melee - together they cancelled out the strengths of the Wolf Lords in melee and eventually took them both down... The lash whip was very effective versus the Wolf Lord armed with a Frost blade and Saga of the Warrior plus T6 blunted the other Wolf Lord's S10 thunderhammer. The genestealers went through the Thunderwolves by the way.

I am also going to drop adrenal glands on the Warriors in exchange for toxin sacs... Versus T5+ I think this is the better combination with bone swords and lash whips.

I'm very excited about the new list and this is what I plan to bring to my first Grand Tournament for 2012.
Posted by Terminus Est at 11:26:00 PM

Email ThisBlogThis!Share to TwitterShare to FacebookShare to Pinterest
Labels: Tyranids