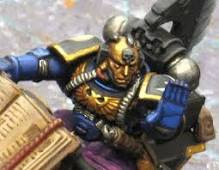 Again no pix. I hate to post WIP shots because of inane comments. I remember when posting work on my converted Mephiston somebody had serious issues with the placement of one purity seal. >.<

Anyways I was up into the wee hours sculpting like a madman and I'm happy with the results. I ended up with a very dynamic pose and robe with a serious cowl. The Clint Eastwood effect was simply not meant to be but I was able to incorporate some subtle imagery from the pictures I posted in the last article. So like I said I'm happy. I'm not a golden daemon level painter or Michel Angelo but I find people tend to like my stuff. The Epistolary is the final edition to my Blood Angels DoA list then I'll start in earnest on dark eldar. As soon as the Librarian is painted I'll have some pictures posted. It's nice to have a model I want to use... I tried two other attempts at a Librarian but was unhappy with how they turned out. One was a conversion using a Dark Angels robed miniature from the DA veteran sprue - turns out lots of people are using this idea and I'd like something a bit different. The second attempt was a classic pewter Librarian miniature - definitely an awesome model but not what I wanted.

PS -@ Brent:
The picture was randomly chosen from the Internet. It shows just how awesome a death mask looks for a Librarian conversion. Just snip off the halo and then file it down. Looks like there was a lil green stuff sculpting to affect a hood.
Posted by Terminus Est at 7:19:00 PM