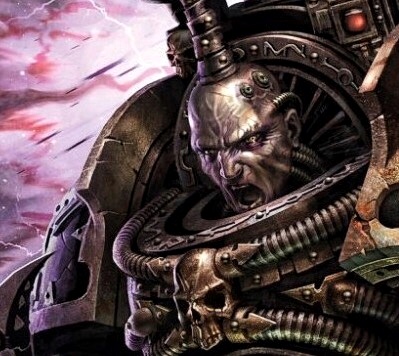 Hello everyone it’s BBF here again with my third installment of Black Legion tactica. Terminators and Land Raiders - go big or just go home ! This past weekend I had a thrilling game versus the new Astra Militarum (Cadians). Lots of Russes, Baneblade and some boots on the ground. Expect to see more Leman Russes... they are the new hotness since GW has buffed them considerably now with some crazy stratagems and tasty special orders. A Baneblade rerolling all missed hits and failed wounds is a frightening thing to behold indeed.

I took a lot of heavy losses early on but some of my key units hung in their til the bitter end and made a game out of it. I made one silly mistake which cost me the win but it was still very close right down to the last dice roll. The new IG could very well be the top codex for now and it’ll be interesting to see what happens with the soon to release new eldar codex.

I’ve been playing Black Legion exclusively for some time while I assemble and paint my new Primaris Space Marine army. During this period I’ve tweaked my original army list such as using different Marks of Chaos for my terminator squads in order to buff them with the appropriate stratagems... it’s paying some dividends too.

I’m not going to lie, this can be a tough army to play so if you want an easy net list like Chaos or Imperial Soup this might be a good point to stop and think about why you play what you do. I have always been into anti meta armies. I do have to say after watching a VLOG by VisiCast that adding some blob to your army can be a really good thing and is well proven ... as pointed out by VisiCast the blob element can make the game more complex which is good but there should be natural counters just for overall balance. The thing is that the very best competitive players strive to break the meta rather than emulating it - change is constant.

This article focuses on how to get the most out of Abbadon, arguably the best current melee specialist in the game. First I take the Warlord trait that generate an extra wound to his base number and he can ignore any wound on the roll of a 6. Abbadon buffs your Chaos terminators making them unbreakable and reroll all missed hits... he does a lot of work if played correctly. Abbadon also has the new Eternal Warrior halving damage taken. He can still be quite fragile but if well played can decimate an opponent’s army.

Abbadon has the keywords for every Mark of Chaos granting him access to a number of very strong stratagems, such as attacking twice in a row (Khorne) and regenerating lost wounds (Nurgle). You must play smart to protect him and I take a Sorcerer for the sweet sweet psychic buffs such as improving his invulnerable save up to 3++ and Warp Time to ensure he will make the key game winning charges. It’s important to note he has the new Eternal Warrior rule with cuts wounds inflicted in half. You can also just use him to buff your shooty units rerolling all failed to hit rolls which is one of the things that makes Guilliman so good.

Abbadon is armed with not one but two very deadly melee weapons. The Talon doubles his strength plus he also has the daemon weapon Drachyen which grants d6 extra attacks... he has the ability to land a lot of punches, hitting on 2+ with rerolls. As such Abbadon can destroy any enemy unit including even super heavies. A great stratagem to pop versus super tough enemy units is the +1 to wound.

Deployment is critical for this army. Use line of sight blocking terrain when you can. You must survive long enough to ensure hit the enemy line. Make sure your Land Raiders use some cover when possible to improve their saves... it can make a huge difference. The Land Raiders provide long range powerful shooting that can shuttle your terminators into key positions. As good as Land Raiders are there are plenty of armies that destroy one first turn if your deployment is sloppy - they must be deployed for the +1 cover save against these types of armies even if you are going first to counter a first turn seize versus strong alpha strike armies such as the new Astra Militarum.

This type of army must literally be played reverse to the currently popular blob armies. Missions such as NOVA and the new ITC missions allow you to pick objectives that force your opponent to come to you ... this is pure gold versus blob and denies them their inherent strengths. You have super killing power but literally no bubble wrap. If you do go first which is to your advantage you can Alpha Strike using the tactics I’ve covered in these three articles. Elite armies have the advantage to go first using the new ITC missions but you must hedge your game which goes back to deployment, otherwise you’re betting the farm on a single dice roll wguch is literally too scary for me... I’d rather be able to weather the first turn storm then beta strike to maximum effect. Black Legion can do this extremely well if you have the necessary maturity.

My next article will cover the Forgeworld exploits which takes this army over the top.