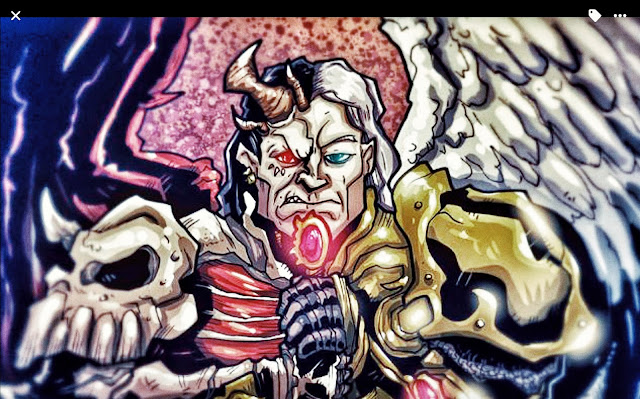 The Phalanx appeared beside the Vengeful Spirit materializing via a perfect jump from warp space. Batteries upon batteries of nova cannons let loose point blank salvoes tearing into the exposed side of the Chaos war vessel. The crescendo tore through exposing crew to the sudden death from the deadly cold vacuum of dead space. Again the nova cannons unleashed another barrage ripping through the last of the void shields. Tilting to apogee the Phalanx speared into the next section of the Vengeful Spirit, boarding torpedoes tore into the outer breaches vaporizing hardened void armor as their claws sluiced through securing breaches for ready teams of Templars to enter the barge.

Warning klaxons sounded within the command deck. "We have been penetrated." said the skipper. Abbadon shot forth from his throne grasping at the second cask holding the immortal Drachyen. "Justarein assemble." commanded the Warlord as he gripped the hilt of his daemon sword. Explosions ripped through the chamber exposing the occupants. A sea of black armored Marines began to climb through the burning wreckage firing ranged weapons into the tight confines. Servitors died in throes as the Templars came forward.

"I smell your taint." came a cold voice. Crashing through a rended wall a winged giant appeared clasping a burning sword. "For Sigismund!" The blade came to life blazing so bright all were blinded, even the Archfiend could not see. The sword swept through like a scythe of death and everything that stood in its way was laid to eternal rest as it consumed their warped souls. Sanguinius cut through the Justearin within the blink of an eye then again the Templars' bolters sang Death all trained on Abbadon. Turning to fight Abbadon lifted the Talon to ward off the frontal attack. "Cease fire." commanded the Angel. "Are you ready to test your mettle versus a true warrior of the Emperor's blood?" Abbadon charged spraying the Primarch with the combi bolter component of the Talon. Sanguinius dodged each shot as he advanced straight ahead.

There came an involuntary cry of pain as the Black Sword speared through the Archfiend's chest puncturing both hearts with one swift strike. Outside the immense gravity well generated by the Phalanx began to consume the remains of the Vengeful Spirit. One huge black gauntlet cradled Abbadon's skull as the Angel gazed into his blind eyes. "Bring your precious weapons to bare now." taunted Sanguinius. The crushing power of the Primarch pulled the skull free exposing the pale neck. The tip of a deep ugly scar ruptured as his fangs plunged into the pulsing vein. The blood and life energy stored within the tainted vessel tasted so bitter. Sanguinius drank deep. Abaddon ceased to struggle as the Angel released him letting the shrunken body collapse upon the deck. The Archfiend looked up to see only Sanguinius standing over him, the daemon sword had clattered to the floor, then the tip of the Black Sword burst through his brain pan butchering the grey matter stored within the ruined skull.
Posted by Terminus Est at 2:56:00 AM