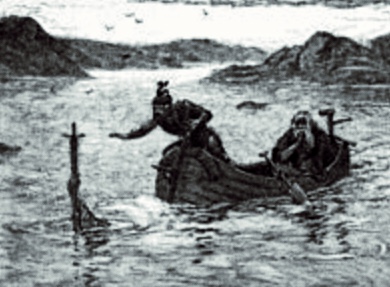 Sanguinius fitted the last of the tight clasps into his suit of black armor as they clicked into place. The plate was pitch black devoid of any marks other than a fractal pattern minutia of filigree deeply etched into the interlocking plates. His wings were furled tightly back hidden from sight within the combat chamber. "I need a weapon."

The Tech Marine bent over unlocking a hidden war chest. The hinges worked seamlessly as the top slowly slid open revealing a long black sword stored in an iron scabbard. A pair of golden Chymera formed the guard of the hilt.

"The blade is said to date back to original advent of mankind, forged on an isle known as Avalon. Caledfwich, the magical sword first wielded by Fergus mac Róich. The black steel was forged from heavy ores plundered from the deepest depths of the darkest ocean on Terra. Much later it was reforged again during the Age of Dark Techology and reunited with the original scabbard. Both are arcane and possess their own set of other worldly power. It said when Fergus first drew the blade its light shone brighter than one hundred thousand burning torches, blinding all his enemies. Keep the scabbard with you at all times for no injury will you suffer. The blade's astral light is holy and stored directly from the Sun."

Sanguinius bent on knee clasping the long hilt. He felt a steady pleasant thrum purring as he withdrew the sword. "Truly a weapon befitting a Primarch." He looked down upon the Ancient word etched into the blade 'Excalibur'.

"The Black Sword was last wielded by our finest champion and he slew untold number of Chaos Champions. Only one pure of heart can master this blade." said the Templar.

"Yes." said the Tech Marine. "They will both serve you well."

There drew he forth the brand Excalibur,
And o’er him, drawing it, the winter moon,
Brightening the skirts of a long cloud, ran forth
And sparkled keen with frost against the hilt:
For all the haft twinkled with diamond sparks,
Myriads of topaz-lights, and jacinth-work
Of subtlest jewellery.