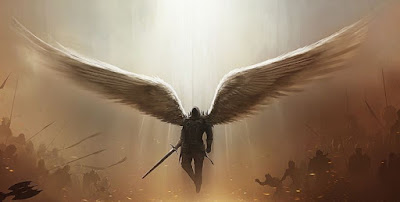 The Death Company was prepared for battle dark in the silence and brooding. Bruised and sullen the storm clouds had the light of day obscured. Looming low and ominous in twilight premature thunderheads rumbled in the distant overture then all at once they parted. Light streamed down in bright unbroken beams. Overhead a golden warrior emerged from the opening and floated down towards the ruined sepulcher. The Sanguinor held his ancient Blade Encarmine in one gauntlet and a relic spear in the other.

The eldar broke from the temporary trance lifting up their shuriken weapons to take aim. Heavy staccoed bolter fire from the Death Company dreadnaught erupted into the xenos instantly pulverizing them. Lifting his dreadnaught power fists the Ancient opened them like flower petals greeting the light revealing heavy flamers from within and unleashed burning gouts of promethium as he slowly turned in place thoroughly drenching the enemy. The smell of burning flesh quickly filled the morning air and the accompanying screams of agony drowned the steady drum of the hurricane bolters.

Landing in the center of the ruin the Sanguinor lowered his melee weapons and withdrew a pair of polished ivory canisters from his utility belt. His armored fists crushed them releasing a sudden cloud of burning black incense. He pulled more canisters loose and broke them as well throwing them into the masses of ever crowding eldar surrounding the sepulcher.

The Harlequin stode his weapons and then quickly darted away only to be met by the burning gaze of the Sanquinor from above. He drew back the spear and launched it with a sharp twist of the wrist. It flew like a missile catching the pariah dead center in the back skewering the troupe like a piece of fresh meat. Twisting about the Harlequin clutched at the shaft as he bled out but could not set himself free.

Still the many eldar surrounded the sepulcher teeming around it in vast countless number. The closest suddenly broke from their deep exhaustive battle fatigue clutching up at the marble stone block upon which stood Sanguinor towering with his dark host. They looked up with blank sunken eyes and dirty sullen faces. "Cease fire." commanded the Unending Host through his brazen vox grille and instantly all fell silent. "Finally all that was necessary is in place here. A great transmigration shall now pass. So mote it be!" Ash from the burning incense drifted down slowly peppering his armor like a soft gentle mist of refreshing rain. The Sanguinor pulled forth a huge golden chalice holding it over the gaping black maw of the sepulcher. Tipping it over ever so slightly a thin stream of bright red blood dripped from the sharp golden edge silhouetted by golden rays of burning sunlight. The silence held for a just a moment more then there came a horrid deep moan followed by a shrill lonely scream from the black depths of the ancient sepulcher, something large stirred below violently pained by its sudden reawakening. The pitch of the scream was ever so intense of the highest audible Octave. Dark blood began to quickly drip from the smudged nostrils of the watching xenos as broken rock and bits of stone trembled from an unseen force. That hidden below screamed again, a long wail that tore at the very realspace. Something gigantic stirred below in the black pit as the very warp began to bleed through into the surrounding continuum. 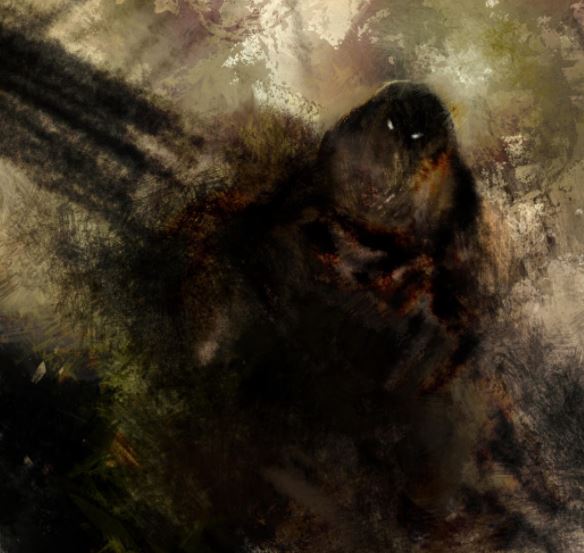 The Sanguinor and his companions continued to watch in silence, all of them anticipating the end with a vicious relish hidden by their masks from the braying crowds swelling below. There came the sound of deep raspy breathing and heavy panting from the pit then a pair of giant skeletal hands broke free from below clutching and grasping hard at the thin edge then the very top of a huge skull rose up, soft beautiful blue eyes sunken into the deep black sockets staring out in wonder. The giant wailed in pain as it struggled to pull itself free from its broken sarcophagus below. The air had grown hazy and it was hard to see everything now. It throbbed with a deep violent hunger consuming its only thought as it slowly climbed out dragging itself free from the black gaping maw. "Feed me!" it shrilled then wave after wave of a voracious feeding vacuum uncoiled from the animus buried within the ancient skeletal form. Too late the eldar realized the imminent danger and broke. "Feed me!" it cried again as the very closest xenos began to dissolve grasped by the many long wicked unfolding protoplasmic tendrils reaching out to grasp and consume them. A shock wave exploded from the epicenter capturing them all. One by one each but in the blink of an eye they were all wholly consumed, their souls extinguished as well. 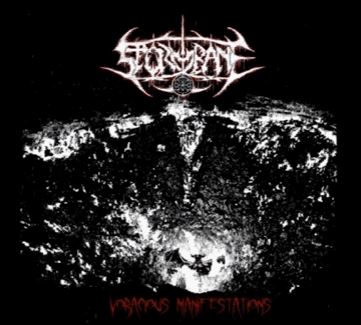 A mirage of pale skin grew over the face of the skull as the giant licked at the ether energies folding in to his new form. Huge wings with the whitest of feathers unfolded from its now deeply muscled back tearing from festering wounds. Deeply buried memories exploded within its mind as it looked upon its fleshed hands, bare feet splaying in the black soil. Sanguinius smiled as he looked down upon his waiting children. "By my blood we are reborn And reunited onto this day!" 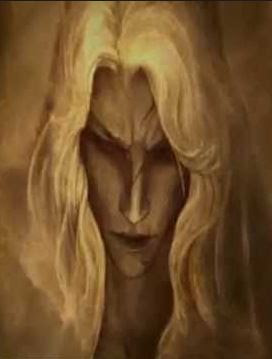