LVO and the Current State of the Meta 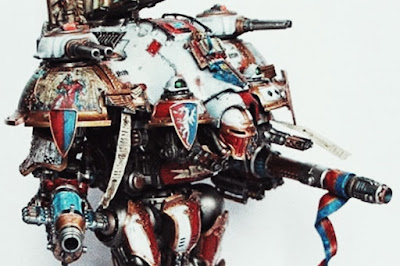 When it comes to hyper competitive events it’s important to remember this is not about playing narrative games in your garage or what you’d like to see win... cheer up because you can always watch a vast myriad of fluffy video batreps on YouTube. These events show us what are the very most competitive armies love it or hate it.

You must bring the most venomous list that has been play tested to the end of time and have your tactics and dirty tricks locked down real hard for the major events. Certainly some interesting army lists made it to the final day but they were all swept aside going into the quarter finals. The semi finals featured three Castellan with Imperial Guard armies and one Altioc Ynnari with some dirty dark eldar army for the Vect stratagem. It just seems like the days of sleeper armies winning big is over now. It’s all about the nastiest army lists. Do you remember when some people were still up in arms about the loyalist Primarch ?

Soup is still on the menu and in a very big way. If we look back to NOVA the past year not much has really changed in terms of the current meta. I was personally hoping Orks could shake it up but the Boyz failed to produce the desired results. Oh well maybe the new Genestealer Cult (GSC) can produce a sustainable spike. Sisters have a new official codex to release this year too so here’s to hoping for some change.

I’m not going to say that GW completely missed the boat not increasing the points of either the basic guardsman at 4 points per model or the Castellan with the release of CA2018 so I am supposing they really like the way things are now for an indefinite amount of time... get used to it. I look at it this way as an ardent Space Marine player - Imperial Guard get almost three guardsmen per Space Marine Scout and the basic guardsman is infinitely better in every way due to the plethora of traits they have to choose from when designing an army list. Eighth Edition is all about board control and at 4 points per model nobody does if better. I’m not bitter either... just telling it as I see it.

If we look back to Fifth Edition we can see a striking trend... yes I’m talking about Robin Cruddace the current head of development for Warhammer 40k. He says he loves his Howling Griffons but really he’s not fooling anyone. Imperial Guard was the first step towards the ultimate shooty as heck army which then featured the ignominious leaf blower army and unkillable Chimeras full of veterans with red hot plasma death. Imperial Guard was the most competitive army in Fifth Edition until finally the release of Necrons that ate cold armor like no tomorrow. Grey Knights and Space Wolves we’re both inevitably melted off the table, it’s just the way it was back then. Imperial Guard fill another roll now with the ever tasty Soup but the end result is the same when we look at the penultimate army currently dominating the meta. Honestly I don’t see GSC or Sisters changing anything so I suppose we will just have to wait for the next FAQ following Adepticon.

How do you feel about the current state of the meta and does it affect you as a gamer? I’d love to see what you have to say so let us know. If you like to see a change tell us how you’d like to see it implemented.