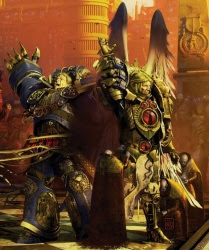 Sanguinius caught a quick glimpse of himself in the dull mirrored shard laying against the broken stones littering the floor. His pitch black armor was covered in an intricate sworl of ancient runes carved deep into the thick layered sheets of adamantium enamel. The forgotten language of Baal Secundus telling the secreted litanies of past battles fought during the Great Crusade. His long locks of golden hair were tied back tight to his skull and his eyes burned with unspoken visions. The Primarch wore the polished skulls of Lorgar, Fulgrim and Mortarion fastened to his belt taken as grizzly trophies of the new war. Dark rubies encrusted his gauntlets cut in the shape of polished tear drops. A single black tear drop had been tattooed below his left eye dripping from the tear duct. Clutching the long hilt of the Black Sword with both fists he emerged from the burning remains of the shattered ruin looking ahead. Guilliman stood across the broken wake resolute in final meditation. Long tongues of molten flame burst from the silvered edges of his sword licking at the unknown ore from which the blade had been forged.

Broken bodies of dead Templars and Ultramarines littered the battlefield, piled high in some areas like offerings to the dark Gods. There were few survivors on either side. Only the two Primarchs stood holy uninjured. The Ultramarine lifted his ranged weapon firing indiscriminately from the hip as he slowly advanced ever so cautiously towards his brother. In a blinding quick flurry of skillful parries Sanguinius deflected the shots carving some of the micro rockets in twain. Drawing the Spear of Teleos from his back he launched it hard aiming for Guilliman’s torso. The Spear spiraled high then plunged down at the last moment piercing Guilliman’s thigh. The tip was barbed and coated in the blackest poison taken from the assassin’s cell. Grunting Roboute lopped off the long pole arm leaving the Spear tip buried deep in the knotted muscle. The poison began to disperse flowing into the blood stream but the pale blue armored Primarch shrugged off the pain as he continued to advance.

"For the innocent." whispered the Blood Angel. "And for all those that gave their lives most willingly for a just cause." Guilliman could only just grumble, the filthy poison had swollen his tongue. The Angel came straight at him in a blur as a pair of Stormbirds flew across the red skies on another bombing run. The Black Sword reined down striking hard against the blue armor scoring the azure enamel. He caught Roboute’s wrist gripping it hard as an iron vice. The flames of the burning licked at his black armor scorching it as the searing heat poured off the long blade. Sanguinius head butted Guilliman’s skull fracturing the exposed nose driving the broken cartilage up deep into the nasal cavity. Roboute grabbed at his bound wrist with his free gauntlet seeking to regain purchase. Skillfully the Blood Angel drove the sharp tip of the Black Sword punching through the enemy chest plate puncturing one of the two beating hearts. Guilliman toppled over but would not release his grip on the burning blade.

Sanguinius brought down hard one of his armored boots crushing Guilliman’s wrist. The blade pattered away then he drove the Black Sword through his brother’s skull piercing the brain pan.
Posted by Terminus Est at 3:16:00 AM