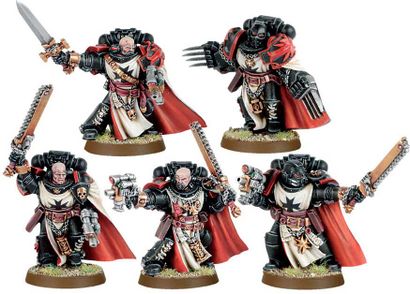 This article is the analytical comparison of three units:

All three are core units, while the first two are troops and count as objective secured. The PCS is the most versatile and can be kitted for ranged shooting, melee or a combination of both. I would argue that PCS is always a better choice over AIS since it’s much more flexible and better at melee since you can take multiple powerfists. The one advantage AIS has is it can fight twice using a stratagem, which can be quite situational and not always advantageous. PCS offers everything desired for Veteran Intercessors, costs less points, is objective secured and again is more flexible. Remember that PCS get most of their wargear for free, such as the powerfists.

Now let’s compare a five man PSB versus a five man AIS. Assume the former is armed with a thunderhammer, pair of lightning claws and three power swords while the latter is armed with a thunderhammer and chainswords. The difference in points is only 22 points. Chainswords have been nerfed by the Armor of Contempt rule - the power swords and lightning claws will inflict much more damage than the chainswords. PSB is amazingly cheap for what you get plus they have the weight of attacks at three base attacks per Sword Brother. If objective secured is important Black Templars have a stratagem (Strength of Conviction) that makes a core unit count as objective secured, plus it occurs at the start of the command phase, so you can steal an objective from your opponents and score more victory points - CPs for VPs. PSB have an amazing stratagem (Exemplars of the Crusade) that each time a model rolls an unmodified six to hit in melee scores an additional hit. If you combine this with the stratagem Gene-Wrought Might, then each hit roll of six automatically scores two wounds - that’s a powerful combination.

Some Black Templar players wish that PSB had more to offer but I’ve heard many loyalist Space Marine players for other Chapters state they wished they had an equivalent unit… isn’t that ironic and so typical for Warhammer 40k - some people are never happy.