Introduction to the Black Templars

My first article was tactical and while popular many readers said they want some background regarding this Chapter. First let me say if you like to play assault heavy armies you might want to consider Black Templars. While their rules aren’t overpowered they do benefit from having a true ninth edition codex. Black Templars aren’t as fast as Blood Angels or White Scars but they can be one of the most resilient Chapters… and they are fast enough.

Black Templars are a second founding successor Chapter of the Imperial Fists and their first Chapter Master, Sigismund, was around during the Horus Heresy - first Captain to the Primarch Dorn. Sigismund was one of the most skilled fighters ever. Dorn gave him his best armor and weapons during the Siege of Terra so he could lay waste to many champions of Chaos, triumphing over all he met in battle. Sigismund was the very first Emperor’s Champion. Alone Dorn and Sigismund held back the Emperor’s Children, which is truly a mighty feat.

Sigismund led the more zealous of the Imperial Fists with him to the founding of the Black Templars, and became their first High Marshal. Sigismund swore an oath upon leaving Terra, that he and his new Chapter would prove their loyalty by never resting in his duties against enemies of the Emperor. Sigismund spent much of this time remaining vigilant over the Cadian Gate, insisting that Horus' Traitors would one day return to plague the Imperium. Every High Marshal has renewed Sigismund's oath of never-ending crusade and as such, the Black Templars' Crusade has continued for over ten thousand years.

Black Templars are a fleet based Chapter and roam the galaxy in their warships, conducting long arduous crusades. Unlike many other chapters, the Black Templars do not have a homeworld. Eschewing the idea of one, they opt to live aboard their crusade fleets. These vary in size and are made up of dozens of Battle Barges, Strike Cruisers and other craft such as training vessels and huge forge ships.

Given this fleet-based nature, the Black Templars are rarely assembled as a Chapter, but are instead divided into many Crusades, every Crusade being responsible for its own recruiting as well as training of new Neophytes. This flexible, mobile nature allows the Templars to continue the first mission of the Black Templars: to actively seek out the enemies of the Emperor and destroy them before moving onwards to find the next foe.

The exact number of Crusade fleets active at any one time, as well as the size of the individual fleets, varies according to the Chapter's needs and abilities. The exact size of Crusade Fleets varies, with some numbering a handful of warriors while others may even number thousands. However the typical size of a Crusade Fleet is between 50 and 300 warriors.

The High Marshal himself has his own personal Battle Barge, the Eternal Crusader, a huge vessel that is the spiritual home of the entire Chapter and contains its most sacred relics, chapels, and reliquaries. It has been expanded and refitted many times and can currently hold twice as many Space Marines as a normal battle barge.

By their doctrine, the Black Templars abhor the traitor, the alien and the mutant. The last category includes psykers, but Black Templars do use psykers in other non-combatant roles, such as Astropaths and Navigators. Black Templars view these beings with special reverence as they see them as able to commune directly with the Emperor. The Black Templars are also one of the few Chapters to not utilize Librarians since the psychic catastrophe known as The Howling.

Black Templars place great emphasis on close combat prowess and honour. As such they can often be seen charging into suicidal situations to avenge fallen comrades. Black Templar Marines also set themselves apart from standard Codex doctrine by including Neophytes into squads of fully initiated Marines to help teach them the ways of battle and the art of combat.

The Black Templars have continued in the style of their first High Marshal, preferring close combat over ranged warfare. This is further emphasised by the fanaticism of Black Templars Initiates, whose righteous anger makes them impulsive and headstrong. 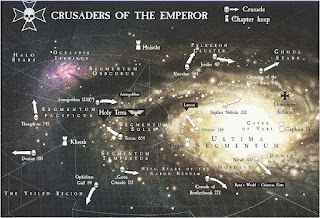 When making war, the Crusade will focus on two main tactics. The first is orbital assault; where the Crusade will use drop pods and Thunderhawks to perform a mass-landing in the wake of a heavy orbital bombardment. If resistance is still strong after this, the Templars will land their heavy armour and launch an armoured spearhead against the weakest link in the enemy's defensive line, using Crusader-pattern Land Raiders.

As part of their dedication to the Emperor and their Crusade, the Black Templars swear fell oaths of faith and protection. Before a battle, it is considered customary to renew one of these oaths, the particular vow serving as a focus on the particular aspect of their duties considered to be necessary to ensure success.

The Black Templars were the first Chapter to find the design for the Land Raider Crusader and were the first chapter to make use of it. The Crusader design replaces the lascannons mounted on standard Land Raiders with Hurricane-pattern bolters, placing a greater emphasis on anti-infantry firepower and freeing up greater space within to carry larger squads.

The Black Templars are also notorious for defying Codex doctrine that states a Chapter may only number 1000 battle brothers. This is partly due to the divided nature of the Chapter, being spread out everywhere on separate crusades (usually consisting of several hundred Battle-Brothers) and no one has thus been able to keep track of their exact numbers. However, it has been estimated that there may be several tens of thousands Black Templars Companies spread out around the galaxy - an almost unstoppable force if gathered at one place and cause for the Inquisition to keep a close eye on the Black Templars.