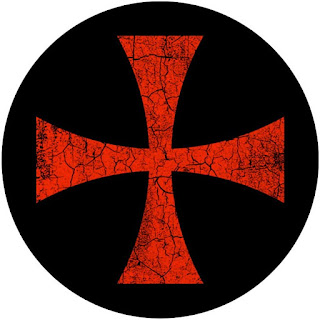 The Lord of Contagion waddled forward, the long hilt of his great axe clutched by both oversized rusted gauntlets. The left hand had three stubby fingers terminated into long broken claws while the right had six spindly long fingers wrapped tightly around the strips of bloody scabbed cured flesh. A single orb jutted out from the corroded helm blinking at the inky black night. Its tongue rasped against the grille. "Just another Space Marine…" it chortled as the bulking husk began to shamble forward. Wave after wave of fecal stench poured off the bone white plate. Instinctually Ezra squatted and stepped back into the blast zone carefully passing over the many dead. His injured arm snapped in place as he launched the heavy cleaver with a flick of the wrist. The rectangular blade spun as it closed in quickly crossing the short gap between the two combatants. Cutting into the exposed mounds of dead flesh seeping out from under the enemy’s helm the heavy blade cut deep through the rotten gristle locking in place. Black ooze dripped from the fresh rend spilling down upon the swollen vambrace.

Ezra felt raw bolts of electricity coursing through his body re-energizing his drive to fight. He ran the tip of his tongue over his teeth then spat. His free bionic hand clutched at the second chain sword mag locked to the back of his power pack. Dual wielding the two chain swords he charged straight at the Lord of Contagion. Striking with fiendish speed the traitor drove the head of his great axe descending upon the Templar’s head. Ezra countered crossing the chain swords high up to catch the poisoned blade. The mechanized teeth screamed as they fought in unison to block the strong blow. He then deftly spun away racking the back plate of the enemy chipping deep into thick interwoven plates of armor.

"You can’t win this fight." wheezed the Lord of Contagion.