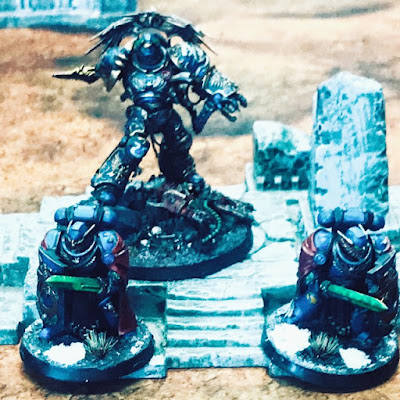 Hi everyone Black Blow Fly here to discuss some list building tips for Ultramarines which I have been playing in-between seasons for the city league where I live. No ITC Missions, just playing Eternal War Missions from Chapter Approved 2018 so far.

Devastator Centurions
My current build is a squad of three Centurion Devastators (DevCents) armed with lascannons and Hurricane Bolters... it’s been great so far supporting them with Calgar and the Phobos Lieutenant for casual games and Guilliman for more competitive games. I also just started fielding a Primaris Ancient with the relic standard... wow they do some work. I’d like to work in an Apothecary but would rather use those points for typically a Vindicare Assassin which synergizes well with Guilliman (i.e. , 12" re-roll 1s to hit buff aura). I also am bringing Tiggy and his Prescience buff really helps to keep the DevCents around for another turn.

I recently saw a battle report using Grav Cannons for the DevCents along with Guilliman versus Necrons - lots and lots of damage inflicted over the course of the game including taking down the Necron heavy construct by turn 2. I know heavy bolters and Hurricane Bolters is a popular configuration now with the new Bolter Discipline rule and for good reason but I prefer the long range anti armor configurations. There is also the option for the Missile Launcher but then the squad becomes a crazy amount of points. I’m not claiming there is one best build for DevCents but this one has been doing some real work for me.

Hellblasters and Inceptors
My other two go to ranged anti armor units are Hellblasters with the standard Exterminators and five plasma Inceptors. Hellblasters are self explanatory and a very popular choice for Space Marine armies. Rarely do you see the assault or heavy versions used for good reason.

I love the plasma variant for Inceptors as each Primaris Marine basically has two short range plasma cannons. They can deep strike which really helps get them into the optimal position for priority target selection and since they have the Infantry keyword they can land pretty much anywhere they want. An excellent stratagem for Inceptors is Scions of Guilliman which lets them reroll 1s to hit and really helps keep them alive longer when they supercharge plus they don’t need a Captain to escort them. You need five to ensure they do some serious damage plus it’s still a fairly small footprint as well. I know lots of players love the assault Bolter variant for Inceptors and they are great versus cheap chaff but plasma is king.

So that’s all for now. If there’s enough interest in the comments I’ll write some more Tactica articles for Ultramarines.