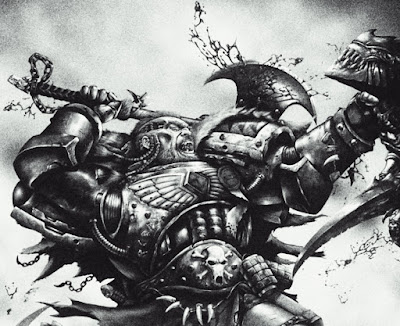 Tyrion led his Kill Team deep into the darkness of the void below. Mordred clutched the haft of his axe ready to strike. The Tech Marine studied his auspex, several blips appeared in the recess, he pointed forward towards the slanted tunnel. One of the veterans reloaded his shotgun with exterminator shells while others sharpened their combat blades. The air smelled fetid and was thick with the stench of mutant spoor. Argonaut stepped forward hoisting up his heavy flamer and activated his power fist. Kneeling down Tyrion unclipped a grenade, flicked the trigger, then tossed it into the tunnel. They all heard it clanking as it rolled down then detonated. Smoke filled the immediate area seamlessly blending into the atmosphere.

Argonaut stepped into the mouth of the tunnel followed by the rest except for Arghus who remained in waiting. They peered into the thick cloud relying upon their auto senses to penetrate the hidden terrain. Slowly they descended into the depths one after another. The smell grew worse then came the howling as a brood of aberrants charged up at them. The terminator waited until the first mutant right before him then he unleashed a flaming gust of burning Promethium enveloping the enemy. Coils of fire wrapped around the aberrants reducing them to nothing but ash and flake.

More came as the Kill Team fired their weapons in perfect unison stepping forward to meet the sudden resistance. Their bolters blazed in the darkness illuminating the tunnel. Mordred broke from the rank as he charged into the mutants chopping limbs free as he broke through the press reaching the hidden cavern.
Posted by Terminus Est at 11:38:00 PM