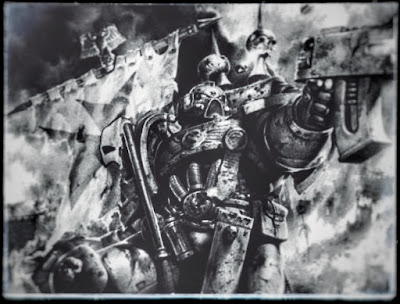 Brother Arghus and the rest of the Kill Team dropped back into the ruin. The genestealer brood poured into the street surrounding their Patriarch moving swiftly at a blinding rate. "I count at least twenty." said the Black Shield as he lifted the frag cannon. The Deathwatch opened fire blasting the closest of the genestealers only a few feet away. At such close range the xenos could not dodge, taking the brunt of the fire power. Brother Arghus drew his power sword from the sheath and ignited the long blade as the pure strains crashed into them. Rending claws and razor sharp talons tore at them raking their power armor. The Black Shield drove the muzzle of his gun into the face of a leering genestealer, blowing apart its head.

Bounding into the mad brawl the Patriarch slashed at one of Marines ripping through his torso splitting him in half. Arghus thrust his sword into the monster’s belly driving it straight through. The beast snarled and slapped him aside knocking the Dark Angel across the room. There came the sound of a hard crash from the back as an old doorway exploded. The Deathwatch Ancient stepped into the ruin and looked down upon the Patriarch. He carried a pitch black Thunderhammer gripping the hilt loosely by one gauntlet. "Dirty xenos prepare to meet your maker."

Spitting black poison from its gills the behemoth reared up and square itself against him. Eldritch psychic energies splayed across its exoskeleton then unleashed sending a super smite smashing into the Ancient. The ectoplasmic attack discharged washing over the Deathwatch nulled.
Posted by Terminus Est at 11:02:00 PM