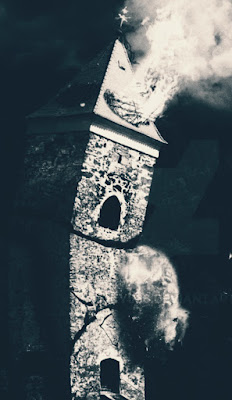 Paragon sat upon a stool looking out through the veiled window from the small room atop the single tower. Silently he looked through the scope of his sniper rifle sighting just to the left of Roboute Guilliman. The Primarch stood upon a raised dias just outside the front of the palace. Marneus Calgar stood to his right speaking to the Honor Guard surrounding their Primarch. The assassin slowly squinted and the ethereal image of an eldar took form. The xenos wore a psychic helm marking it as a Farseer. His fingertip ever so slightly pressed upon the trigger rune. The X round ejected from the vented muzzle spiraling silently towards its mark cutting effortlessly through the refractor field shielding Guilliman and his retinue then the Wraithbone imploded taking the head from the Farseer. Immediately alarms sounded throughout the palace ground. Paragon hoisted his rifle back inside the room and closed the veil. Quickly the assassin dissembled his rifle placing the pieces back into the pouches sown outside his pack. He then lifted the small homing beacon and activated the single black rune.

The door burst open as an Ephoroi entered the small room followed by one of the squad of accompanying Sagittarum Guard Sodalities. "The shot came from here." said one of the Sagittarum pointing towards the veiled window. Carefully they examined the interior but could find no evidence left behind.

"Continue to search the remainder of the tower." said the Ephoroi. "We have failed our oath sworn duty. The shot only just missed."

"It could have been simply a warning." another Sagittarum replied. He lifted the stool but it was bare. "We must determine why this room was left unguarded."

The floor began to quake then an explosion blew out the top of the tower vaporizing the Custodes. A sea of shiny black nanobots swarmed from a top the burning ruins absorbing the last of the residual psychic trace erasing it completely then they vanished as well.